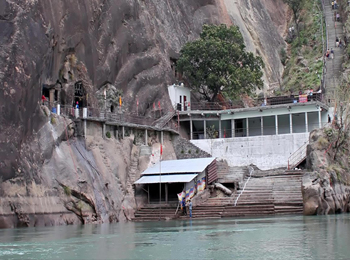 The deity of God Shiva is worshipped at the holy Mukteshwar Mahadev Temple which is located at Thara Jhikla in Gurdaspur, Punjab. The temple is also known as Mukesaran Mandir and is situated on Shahpur Kandi Dam Road near Pathankot. The deities of God Ganesha, God Vishnu, God Brahma, Goddess Parvati and God Parvati are enshrined in this temple. 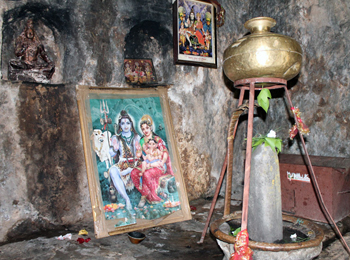 This sacred temple is of great significance as it consists of caves that date back to the time of the Mahabharata. As per a legend, the Pandavas visited these caves and stayed in it for a fortnight during their exile. These caves are situated on the banks of River Ravi at Shahpur Kandi which is almost 22kms away from Pathankot City. This temple is located on a hill top and is considered a landmark of the city. The caves as well as the temple are carved on a rocky hill.

The temple comprises of a white marble Shivalinga with a copper Yoni and it is surrounded by deities of God Vishnu, God Brahma, Goddess Paravati, God Ganesha and God Hanuman. The Shivalinga consists of horizontal and vertical lines that signify blood veins, a symbol of energy and strength. The Shivalinga is quiet sacred as it is one of a kind in the world. The third cave of the temple consist a symbol of Chakra and it was also known to be the place where Pandavas meditated.

As per a legend, Mukteshwar Mahadev Dham was constructed by the Pandavas in their 12th year of exile. This period was referred as Dwapar Yuga during the exile. The Pandavas reached this area via Hoshiarpur after worshipping Goddess Chintpurni. They found this area quiet and peaceful due to which they ended up staying for 6 months. They carved 5 caves and established a Shivalinga in the temple as they prayed God Shiva for their success in the war. The Pandavas also installed an Akand Dhuna that is a holy fire and a kitchen. The Pandavas then crossed the Ravi River and entered the Virat Kingdom whose centre was Akhnoor that is now in Jammu and Kashmir. One of the five caves has collapsed due to the deterioration.

The festival of Baisakhi is celebrated with great joy at the temple in the month of April as a fair called Mukesran Da Mela is organised. The festivals of Shivaratri, Chaitra Chodiya and Navratri are celebrated in the temple as various prayers are conducted. The temple committee also organises Somvati Amavasya fair. Thousands of devotees and pilgrims visit the temple during the year to worship the Gods.

How to Reach Pathankot

Frequent bus service is available till the temple from Maharana Pratap Inter State Bus Terminal, also called Pathankot Bus Stand. It is located near National Highway 20 and is about 3kms away from the city. The devotees can take the buses of Himachal Roadways, Jammu and Kashmir Roadways, PUNBUS or Punjab Roadways to reach the destination. To reach the Mukteshwar shrine, the devotees can take a bus for Jugial.