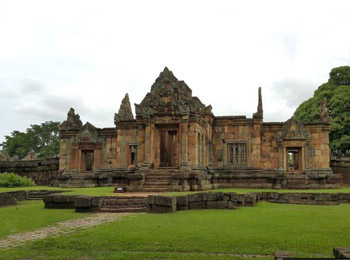 Prasat Muaang Tam is a Khmer temple in Prakhon Chai district, Buri Ram Province, Thailand. The temple is primarily in the Khleang and Baphuon styles, which date its primary phases of construction to the late 10th and early 11th centuries. The primary deity is Shiva, although Vishnu is also worshipped there.

Like most Khmer temples, Muaang Tam is facing towards the east and has a flat concentric plan. It has a central sanctuary and two libraries surrounded successively by an inner enclosure, ponds, and an outer enclosure. Ponds are an unusual feature of the temple, as is the central sanctuary. The sanctuary is not elevated and has its towers arranged in rows of three and two rather than in a quincunx. All except the central tower have been restored.

Kala are prominent in the lintels of the temple. They are the best available things in dating the structure, but the mix of styles makes accurate dating impossible. Several of the lintels on the outer gopurams are unfinished.

Suvarnabhumi Airport in Bangkok is the nearest airport.

The railway connectivity is only available from Malaysia.

Buses operate from Bangkok to the other cities.