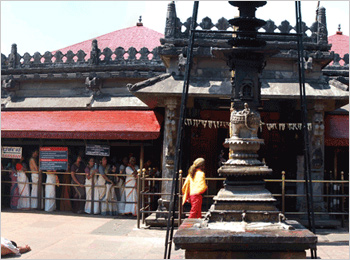 Mookambika temple is an ancient temple located at Kollur in Karnataka. Kollur is about 135 away from Mangalore. It is easily accessed from Tamil Nadu, Kerala and Karnataka by train and road. It is the only temple that is dedicated to goddess Parvathi and believed to be created by Parashurama. This temple is very well known among the people of Tamil Nadu and the goddess Parvathi is called in Tamil as Thai Mookambika. 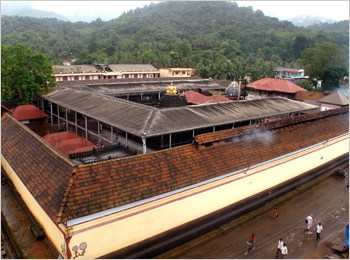 Parvathi temple is located exactly on the banks of the perennial river Souparnika that runs close to the foot hills of the Western Ghats. River Sauparnika has its attribute to the eagle called Suparna that did penance in this bank and attained salvation. This temple has a long history for its origin.It is said goddess Parvathi killed the Kamsasuran who lived here and who attempted to become all powerful through his penance. Devi along with the help of Veerabadra, Ganapathi and Shiva initially made him dumb and he came to be called Mookasuran, mooka means to be dumb. Later the goddess killed him with her Chakra on the midnight of Shukla Astami. From then on Devi came to be called as Kollur Devi Mookambika. Then her divine energy became one with the lingam worshipped by Kola Maharishi. At the Sri Mookambika temple the Lingam is the main deity and is known as Jyothirlingam. Devi Mookambika has three eyes and four arms, with the divine disc and conch in her hands. The Mookambika temple is renowned for its beauty and aesthetics, all over the world. Goddess Kollur Mookambika is adorned with flowers. Ritual bathing and prayer to the idol are a common feature of the presiding lingam. The perennial Souparnika River’s pure water is used for theertham and puja. The kollur Mookambika temple wears a festival look during Navarathri and Navarathri is celebrated with pomp, show and gaiety. 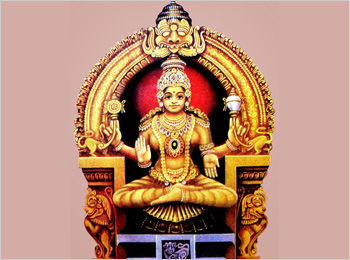 When Baghwan Sankara first came to this place, there was a Swaymabu Linga worshipped by Kola Maharshi. On close observation, Acharya Sankara found that Ambica too was in the Linga invisibly. He mediated upon the Goddess sitting on a place close by. Mother Mookambika appeared before Acharya and blessed. Mother Mookambika idol was made based on the picture that appeared in Sri Sankara’s mind. No abishek is performed to Mother but to Linga only. Other Alankaras are done to Goddess. There is a golden line in the middle of the Linga, visible to the Devotees only during abishek. It is said that Lord Brahmma and Lord Vishnu are on the left of the Linga while Mothers Saraswathi, Lakshmi and Parvathi are on the right gracing the devotees. With so much divine features, the Shiva Linga grants huge benefits to the devotee worshipping millions of deities. The temple has also the Sri Chakra installed by Sri Adi Sankara. As Kola Maharshi worshipped here, the place came to be known as Kollur. As a tradition, the doors of the temples are kept closed during the eclipse period, but this temple is an exception. Pujas continue even during eclipse times. Brahmmacharis are not allowed to perform pujas in the temple. 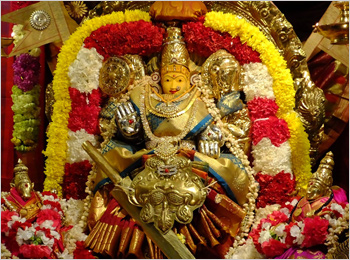 Mother Mookambika graces in a sitting form with discus and conch in hands representing Kali, Mahalakshmi and Saraswathi. The idols of Kali and Saraswathi made of Panchalokas (five metals) are on both sides of the deity. Navarathri is an important festival in the temple. Acharya Sankara sung his Kala Rokanam in praise of the Mother and gained Her blessings. It so happened that Sri Sankara was not able to get up one day after completing his meditation. Mother Herself prepared a medicine for the Acharya and gave it to him. Following this event, Kashayam-a medicine prepared with herbals is offered as Prasad to devotees. This is consumed by the devotees. It is said that Baghwan Sankara authored his Soundaryalahari from this temple. The 98th verse in the series is dedicated to Mother Mookambika. 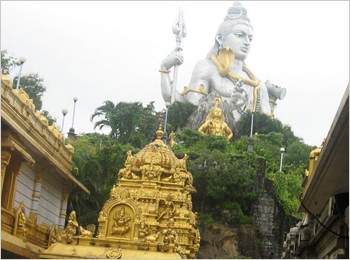 A demon Mookasura by name was performing penance on Lord Shiva., As the world would be subjected to untold hardships if the demon succeeds in his penance, Devas appealed to Mother to intervene in his penance., In the war with Mother, Mookasura demon surrendered at the feet of Mother., As prayed by the demon, Mother agreed to stay here in the name of Mookambika.

The Pancha Pooja and Thrikala Bali festivals are important festivals of the Mookambika temple.

The Kollur Mookambika Temple administration requests the male devotees to remove their shirts and vests before entering the Temple premises. Clothes such as Coats, Hats, Turbans, Bermuda and Shorts, and Lungi are not allowed inside the temple.

Goddess Mookambika is represented as the Linga and is worshiped as Adi Shakti as she embodies both Lord Shiva and Goddess Shakthi (Parvati). As Mookambika is but Mother Saraswathi, prayers are submitted by devotees for gaining knowledge, wisdom and excellence in educational pursuits.

The Nearest Airport is Mangalore Airport.

Kundapur also has a railway station which is on the Konkan Railway route.

Kollur Mookambika Temple is a famous pilgrimage spot. It is easy to get buses from Mangalore, Udupi and the nearby Kundapur.