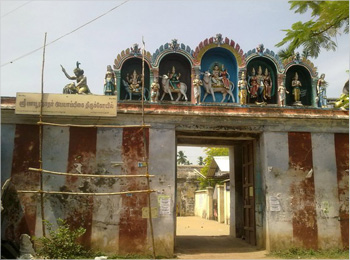 The Mayuranathaswami Temple is located in Mayiladuthurai, which was formerly known as Mayavaram or Mayuram, and is situated in Nagapattinam, Tamil Nadu. The Mayuranathaswami temple is located in the southern part of Mayiladuthurai, and is about a mile away from River Kaveri River. The temple is situated on the Chidambaram - Thanjavur highway, and is dedicated to Lord Shiva. The temple lends its name to the town. Inside the temple, the main idol is a lingam, and the presiding deity is Mayuranathar. The Hindu goddess Parvathi worshipped Lord Shiva in this temple, in the form of a mayura, or a peacock. 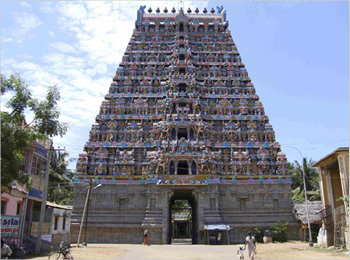 This temple is well maintained with a beautiful tank, several gopurams and mandapams in Mayiladuturai (Mayuram). This temple has great religious significance and is a hub in the temple belt of Tamil Nadu. Several Shivastalams are located in the vicinity of Mayiladuturai. Legend has it that Dakshayani (Parvati) took the form of a peacock after her father’s Daksha Yagnam, worshipped Shiva here; Shiva is said to have taken a peacock form, performed the Gowri Tandavam and united with her here. Mayuranathar is believed to have quelled the Kaveri floods to make way for Sambandar and 4 of the Vallalar shrines in the vicinity are said to be manifestations of Mayuranathar. Interestingly, the Tiruppariyalur Veerattam where the Dakshayagnam is believed to have been performed is located at a distance from 8 km from this temple. Mayiladuturai is in the midst of several shrines with puranic significance. The Sapta Matas are said to have worshipped Shiva at 7 of the temples in the vicinity including Vallalaar Kovil. Dakshinamurthy’s shrine in the nearby Vallalaar (Gurumoorthy - Vadhaanyeswarar) Koyil is of great significance. On the banks of the Kaveri, near the bathing ghats is the Kasi Viswanathar temple with vimanams along the lines of those at Benares.

This temple spread over 350000 sq feet has 5 prakarams, a 9 tiered 165 feet high Raja Gopuram, pillared halls with interesting sculptural work as well as 14 vimanams withseveral stucco images. Inscriptions from the Imperial Chola period are found here. The temple is managed by the Tiruvavaduturai Adhinam, while the Vallalar Koyil and Kaasi Viswanathar temple are managed by the Dharumapura Adhinam.

This temple was reconstructed with stone, during the period of Sembiyan Mahadevi (10th century); however renovations from the 19th century have destroyed the older structures and the inscriptions. Thankfully fine stone sculptures of Vinayakar, Natarajar, Siva-Uma-Alinganamurthy, Dakshimamurthy, Lingodbhavar, Bhrama, Ganga Visarjanamurthi, Durga and Bhikshatanar from the period of Sembiyan Mahadevi have been well preserved in their niches. From available inscriptions it is inferred that the Avayambal shrine came into existence during the period of Rajaraja Chola III (13th century). Till then, there must only have been a Bhogasakthi bronze image in the sanctum of Mayuranathar, as was the practice till separate Ambal shrines were introduced during the reign of Kulottunga Chola I (1075-1120).

The temple complex is 719 feet (219 m) long and 52 feet (16 m) wide. The gopura at the eastern entrance to the temple is nine storeys high and measures 194 feet (59 m). The idol of Durga near the northern entrance of the temple is expertly sculpted and differs from those in other temples. On the temple walls, there is the sculpture of a devotee trying to sever his head as an offering to the God. 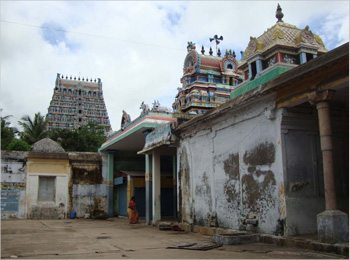 A swayambhu lingam or a self-manifested lingam is the presiding deity. It is the symbol of the Hindu god Shiva. Shiva's consort is known by the names Abhayapradhambikai, Abhayambikai, Anjalanayaki and Anjalai. There are three smaller shrines to the Hindu god Ganesha and another to Shiva as Nataraja or "Lord of Dance". One of the sculptures in the temple represents Shiva embracing Goddess Parvathi.

Lord Aadhi Mayuranathar graces from a separate shrine in the prakara. While the Presiding deity is in the form of Shivalinga, Ambica appears as a peacock worshipping the Lord. Lord Muruga in the prakara is praised by saint Arunagiriar in his Tirupugazh hymns. During the Skanda Sashti festival in Shiva temples, Lord Muruga would receive His Vel weapon from Mother Ambica. Here, He receives it from Lord Shiva. The Gouri Thandavam dance performance of Lord is celebrated as Mayura Thandavam – Mayura-peacock. Lord Nataraja graces from a separate shrine. The first puja in the evening is dedicated to Lord Nataraja. Mayilamman shrine is opposite to Nataraja shrine where both Lord and Mother grace in the form of a peacock. Two peacocks and two monkeys are depicted in the banyan tree above the Lord Dakshinamurthy sculpture in the goshta wall. There is also a Nandhi.

Nadha Sharma and his wife Anavidyambikai came to this place for the Cauvery bath-Thula Snanam. Before they arrive at the place, the 30 days’ time (Aipasi month-October-November) expired. They sadly stayed at the night worshipping Lord Shiva. Lord appeared in their dream and advised them to have the bath before sunrise the next day and assured that they would have full benefit of the Tula Snanam bath. Based on this, the practice of this bath continues even now on the first day of Karthikai month. As Lord Shive froze the bath time for His devotee couple, this bath is called Mudavan Muzhukku. Mudakku in Tamil means freezing, Muzhukku bath.

The couple merged with the Lord then. This Linga is facing west. The Linga with which his wife Anavidyambikai merged is at right of the Ambica shrine. This Linga is dressed with Red Sari only. It also indicates the oneness of male and female. Lord Dakshinamurthi appears slightly slanting on a side with His legs folded.

Mother Aadi Poora Ambal graces from a separate shrine in the Veera Shakti form praised as Abhayambikai. She is also brought in procession to the banks of Cauvery on Aadi Pooram day and Fridays of this month covering July-August. Lord Vinayaka in the prakara appearing earlier from a sandal tree is praised as Agasthya Sandana Vinayaka - Sandanam -Sandal.

It is said that Lord Shiva blessed Nandhi by destroying its pride. This Nandi is in the midst of Cauvery. People take their holy bath in the river during the Aipasi month (October-November) and the first day of following Karthikai month. Lord visits Cauvery each day during this period of 31 days. It is also said that Holy Ganga had Her sins washed off with a dip in Holy Cauvery. This day is Aipasi new moon day-Deepavali. A bath in Cauvery on this day cleanses the devotee of all his/her past sins.

Planet Saturn in the Navagraha shrine appears as Jwala Saturn with Agni-fire on his head. Also a Saturn of normal form with his crow vehicle is by the side facing north performing Shiva puja. This is a very rare form of Sani planet. Those facing adverse aspect of this planet pray here to reduce its intensity.

There are five prakaras in the temple. Juradeva is by the side of the feet of Lord Nataraja. Mother Durga graces with demon Mahisha at Her feet and also with two demons on both sides. This is also said to be a rare form of Durga. Chandikeswara and Tejas Chandikeswara are in the same shrine. Lord Mahavishnu worshipping Lord Shiva is in a separate shrine. Mothers Ashta Lakshmis and Sattainahar are in the prakara. There is also a shrine for Kudhambai Chithar who attained salvation here. People pray to Kanakkadi Vinayaka to take care of their accounts. Kanakku-account.

Daksha, Mother Parvathi’s father, had conducted a yajna. He intentionally refused to invite Lord Shiva, in order to humiliate Him. Lord Shiva did not want Parvathi to attend the yajna, either. But, to correct her father, Parvathi attended the function, but was humiliated by Daksha. Lord Shiva took the form of Veerabadra and destroyed the yajna. A peacock used for the rituals sought asylum at the feet of Mother Parvathi. She ignored the Lord’s advice. She was cursed to become a peacock. She came to this place as a peacock and did severe penance to get Her Lord back. Pleased with her penance, Lord Shiva appeared before here as a Peacock and danced as a peacock – Mayura Thandavam. Ambica was restored to her original form. This is why he is praised as Mayuranathar.

Thulaa Festival is celebrated in October-November. Thousands of pilgrims come here during the Thulaa festival in Ipasi. Shiva's dance is enacted at the Aadi Sabhai on the seventh day of the grand festival.

Procession to River Cauvery(October - November) - The Mayuranathar temple has a daily procession of the Utsavar to the banks of the Cauvery throughout the monsoon month of Libra/Aypasi.

Brahmotsavam(March - April) - The annual festival Brahmotsavam is observed in the Tamil month of Vaikasi.An annual dance festival called the Mayura Natyanjali festival is celebrated within the precincts of the temple each year.

This temple is one of the 276 Thevara Padal Petra Sthalams. It is one of the six temples on the banks of River Kaveri that are considered to be the equivalent of Kasi. On new moon day, during the Tamil month of Aippasi (from November to December in the English Calendar), religious Hindus take a ceremonial bath in the temple tank. It is believed that doing so purifies them from sins, because the waters of the River Ganges and other Indian Rivers mingle with waters of the River Kaveri on this particular day.

Those seeking pardon for mistakes made unknowingly pray to the Lord for peace of mind after a bath in Cauvery. Those aspiring mastery in dance also seek the blessings of Lord.

Mayiladuthurai is connected by rail with most important towns and cities in south India. Mayiladuthurai Junction railway station is located on the Main line connecting the state capital Chennai with Thanjavur. There are lines to Tiruvarur and Karaikudi, making it one of the major junctions in the region. The Mysuru - Mayiladuthurai Express connects Kumbakonam with Mysuru and Bengaluru. There are regular express trains that connect the city with major cities in the state like Chennai, Coimbatore, Madurai and Tiruchirappalli.There are passenger trains that connect Mayiladuthurai with Thanjavur, Tiruchirapalli, Thiruvarur, Chidambaram and Viluppuram.