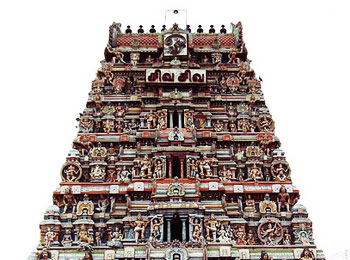 This temple is 2 kilometres from Ambattur, the industrial hub of Chennai city and is well connected by town buses. There is also a suburban railway station known as Tirumullaivayil on the Chennai Central - Arakonam section of Southern Railway and the temple is 1.5 Km from the railway station.There are 2 Paadal Petra Sthalangal in the name of Tirumullaivayil. To differentiate between the two, the one located in Thondai Nadu is known as Vadatirumullaivayil and other one near Sirkazhi is known as Thentirumullaivayil (North of river Cauvery).Sundarar has composed hymns on the God of this temple. Sundarar when he lost his eye sight at Tiruvottriyur, came to Tiruvadamullaivayil and composed a Pathigam consisting of 11 songs. This temple is more than 1200 years old.The temple is praised in the Thevaram hymns of Sundarar.   Commended in the Thevaram psalms of Sundarar. Tending to the Lord "Pasupada Paranchudar" having His home in Tirumullaivayil, encompassed by fragrant patio nurseries, Sundarar, in his song, says that Lord Shiva's Lotus Feet are his riches and knowledge and he couldn't care less for men of material considering. He looks for Lord's effortlessness for alleviation from specific issues he was confronting then. This is the 22nd temple in Thondai Nadu locale (spots covering Chennai, and connecting territories as Kancheepuram, Chinglepet and so forth.) applauded in Thevaram Brahmmotsavam in May-June, Masi Float Festival in February-March and Aani Vasantha Utsav in June-July are the celebrations celebrated in the temple.

Nandi went to war alongside the ruler; the Nandi in this temple is confronting east rather than confronting the God as seen ordinarily in other Shiva temples. There is a great tower on the southern access to the temple. Even though there is another passageway in the main is utilized to enter the temple. There is a 16 column mandapam before the south tower. You will see the Prasanna Vinayakar holy place once you enter however the south tower. Through a passage in the south external hall, one can enter the inward prakaram where the sanctum sanctorum of both the Lord and His consort are found. When we enter during that time south passageway, first we will see the place of worship of Kodiyidaiamman on the left. The goddess is confronting east. Arranged by the Goddess altar is the hallowed place for Lord Masilamani Easwarar who is additionally confronting east as a sivalingam. Both the male and female directing gods are confronting east and the female god's temple is arranged to one side of managing male divinity. This is viewed as extremely huge. It is viewed as exceptionally uncommon to supplicate the female divinity Kodiyidaiamman here in full moon days. In this temple, there is no seperate place of worship for nine planets. Sage Vasishtar has gone to this temple and did atonement and got Arunagirinathar has sung about the Murugar of this temple in his Muruga is seen here with one face and four hands alongside his two consorts Valli and Deivanai. Ruler Muruga's place of worship is situated in the external north prakaram. He is confronting east. The altar for Bhiaravar is situated in the external east prakaram. The flagpost, palipeetam and nandhi mandapam are additionally situated in the external east. There are shrines for Cholapureeswarar, Kuchalapureeswar worshipped by Lava and Kucha, sons of God Sri Rama) and God Muruga with His consorts Valli and Deivanai in the corridor-prakara. The vimana (roof) of the sanctum sanctorum is designed in a special way that is exclusive to Pallava architecture - the Gaja Prishtam, that looks like the rear of an elephant (Gaja - elephant, prishtam – rear).It is built on a circular base and is known as Thoonganai Maadam in Tamil [thoong(um) - sleeping, aanai - elephant, maadam - top of a building (or temple)] or simply, 'a building that looks like the rear of a sleeping elephant'.

Goddess is called Kodiyidai Nayagi - the Goddess with a waist as slim as the Jasmine climber. She is thought to be an effective divinity and is known not Her charitable gifts for recently marries, unwed young ladies for rapid marriage and for a cheerful married life.

She and Her partners, Tiruvudai Amman - the Goddess symbolizing Lakshmi and Vadivudai Amman - the Goddess who is radiant with her thoughtful excellence, are accepted to be three Great Goddesses who shower every propitious thing in life if went by and adored around the same time of Chitra Pournami - the full moon day in the Tamil month of Chithirai.

The king Thond He brought two pillars made of Vellrukku tree, placed them in the temple he built then.  These two pillars are in the temple even today.aiman, who ruled Thondai Naadu with Kancheepuram as the capital, was once vanquished at the war by his adversaries Kurumbars . The ruler, sad by the annihilation, was coming back from the combat zone on his elephant. At the point when the elephant's legs got trapped with mullai creeper on the ground, the ruler cut the mullai creeper with his sword to free the elephant's legs. Incredibly he discovered blood turning out from underneath the mullai creeper. When he cleared them, he discovered a Sivalingam. After supplications to God to the God, the God sent Nandi alongside him to battle his foes at the end of the day. The ruler won the war, and in valuation for God's assistance in overcoming his foes, he built the sanctuary at Thiruvadamullaivayil.

There is a scar on the leader of the Swayambulinga in the temple. As though to mend the injury, shoe glue is connected on the Linga during the time aside from two days in the month of Chithirai (April-May) covering the Sadayam star day. Master shows up in His actual structure nowadays. Venerating Lord Shiva in this structure amid nowadays would assuage the fan of all transgressions, it is solidly accepted. As no abishek is performed to the Linga, A Padarasa Linga (Mercury Linga) is put in a different hallowed place for Pujas. The Vimana (tower over the sanctum sanctorum) is of Gajabrushta – rear of an elephant – plan. laurels offered to Nandideva amid the pujas are worn by the fans confronting wedding issues and those worried about the strength of their kids. Be that as it may, this practice is not took after on the puja days on new moon, full moon, Kruthika star and pradosham days.

Local bus facilities are available to this temple from Brodway, CMBT, Avadi and other big areas.

Meenambakam Airport is the nearest Airport