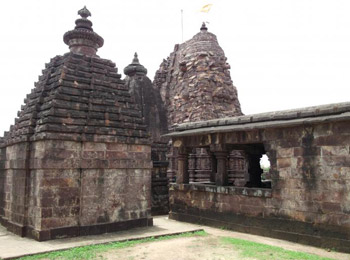 The Shiv Temple is located 40 km from Gadchiroli city is the ancient temple of Markandeshwar at Markandadeo in Gadchiroli District of Maharashtra State, India. The Markandadeo village is situated on the bank of Vainganga River. This temple was supposed to be built by the Danvas (Evil forces) in one night. The temple is made of stone and the structure type is called as Hemadpanth. This temple Complex is dedicated to Shiva. However, the Markanda name is derived from the Markandeya rishi of Haryana who was an ardent devotee of Shiva. He went into penance for years on the banks of Markanda River, Haryana and finally tried to offer his head to Shiva when Shiva appeared and stopped him from that. He blessed him that there would be a temple on your name.

The Markanda temple is constructed on the bank of Vainganga in the east side in 196 x 168 Sqft. area. Earlier, there were 24 temples. At present, there are only 18 temples existing, out of them only 4 temples are in good condition. The main temple of Markanda was distracted by striking of lightening 300 years before. Therefore, no one could tell how the main temple formerly was. Surrounding of the fortifications of the group temples there is temple of Dashavtar. There are 12 Pithas, there are shown extra 2 Pithas here. One of the experts of culture opinioned that these extra 2 Pithas influences the minds of the people more during this period and so more of the 2 Pithas might have been constructed. There are 12 Shivlingas in the temple and courtyard of the temple. Various Arts and Sculptures found in the Markanda Temple are worth a look.

It is said that when Bibhisan, the brother of Ravan, the prince of the Raksasas, was sick, Hemadpant the minister of the Yadavas, cured him and the grateful patient told him to ask for a boon. Hemadpant asked for the aid of Raksasas to build temples wherever he might require them. The boon was granted but on condition that the Raksasas were not to work for more than one night at a time. Hemadpant accordingly built all the temples at Markanda, Bhandak, Neri, etc., in one night. This is a stock story told about the temples of Hemadpanti origin in this district as also the rest of Maharastra.

How to Reach Gadchiroli

The nearest airport is at Nagpur. The nearest railway station is at Chandrapur at a distance of 80 km. The Gadchiroli district has well connected road links to other adjoining districts as Chandrapur, Bhandara and Nagpur.