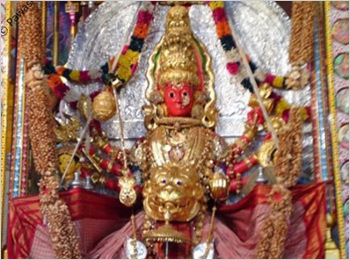 The Marikamba Temple of Goddess Durga is located in Sirsi, Karnataka, India. Situated around 83 kms (51miles) from Gokarna to the east, it is also known as Doddamma Temple meaning elderly sister of all the Mariammas in Karnataka. The temple was built in 1688. 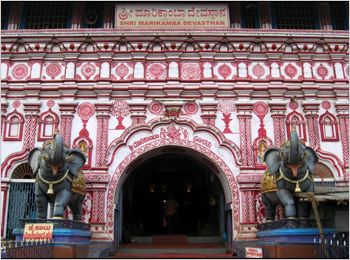 The temple belongs to 19th century. Its exterior is painted blue. There is a courtyard in the middle, which has passage surrounding it. The passages are filled with images of deities from the Hindu mythology. The changes made from time to time inside the temple have taken away any evidence of older structures. The inner sanctum has the idol of fierce form of the goddess Durga with eight arms, riding on a tiger and killing a demon. It is believed that the 7-foot-tall (2.1 m) idol was retrieved from a pond on the road to Hanagal. The temple has very special paintings of murals in Kaavi art, an art form which was popular in the coastal Konkan region of Karnataka. In this art form, now extinct, the top plastered layer of the mural was first dyed with a red colour, which when removed revealed a lower white layer of plaster over which the murals were created.

The priest of the temple belongs to the carpenter, or Vishvakarma, caste. Kanakadasa, a famous saint poet of the Bhakti movement, had visited the temple and advised the people to stop animal sacrifice of the he-buffalo. When Mahatma Gandhi visited Sirsi in 1934, during his campaign to abolish untouchability of Dalits, he refused to visit the temple, as animal sacrifice was a prevalent ancient practice at the temple. The animal sacrifice was in the form of offering of he-buffalo to appease the goddess. A he-buffalo was specially bred for offering as a sacrifice to the deity during the annual Rathayatra. Following the protest by Gandhi, there was a social movement in the town not only to abolish animal sacrifice but also to allow Dalits to enter into the temple. This movement was spearheaded by Keshwain, chief trustee of the temple, in association with Vitthal Rao Hodike, a teacher and dedicated Gandhian of the town. Both objectives of the movement were achieved.

The idol of the Goddess Durga is with eight arms and is also known as Renuka or Yellamma. 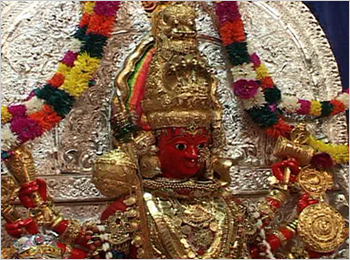 Legends say that the idol of Goddess came from Hangal to Sirsi. There is a mention in Mahabharat that a dominant Shakti Peetha (Seat of Powers) was at Hangal. Dharmaraya in his exile was on his way to Viratanagara. He found Durgi at the entrance of the village. He prayed for protection and kindness and welfare of the society.Hangal is said to be then Viratanagara. This is also mentioned in the inscriptions of Chalukya as 'Fort of Virata'. Researchers too have recorded that Hangal was Viratanagara of Maharashtra. Scholars have given their views that Kunti Dibba (Mound of Kunti) as called now, was the seat of Tribhuvaneshwari where Shri Devi sat in the past. Here the fair of Shri Devi is conducted with fervour and devotion.

The place near Basattikere tank of Sirsi where the box of Mari Devi brought by thieves was laid down first is identified in these times as well. It is a general custom that Mari coming from neighbouring village is called Gali-Mari. The people who were yearning for goddess Mari got assurance of protection by Shri Devi in the form of Mari. A platform was built out of lime stone where the box was kept. There is a stone idol in it. That is called Gali-Mari-Katte. Even now at the time of Shri Marikambe fair outings (horabeedu) are held here. From here in the opposite direction of the temple, on the upper side, is a 'God's foot prints' platform. On Vijayadashami day seemollanghana ritual is conducted. On the platform of Shri Marikamba's footprints, leaves of Shamivruksha are exchanged. After this Shri Devi 's palakki is carried to Kotekere tank and the nairmalya, garlands of last nine days is immersed. 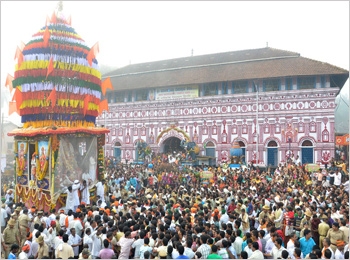 The Sirsi Marikamba jaatre (chariot procession) of the deity is held every alternate year in the month of February and taken throughout the town. It is attended by a very large number of devotees.It is said to be the most famous and biggest fair(jaatre) in the state. Devotees from all around the state participate in this enormous event indulging themselves in the procession. Varieties of shops and plays, amusements for kids, circuses are arranged for the people. The plays depict the story of the godess killing mahisha(demon) being his wife.

Best time of the year to visit the place is between November to June. In March of every even year, Devi Jatra Mahotsava is conducted.

The place can be reached by road from Bangalore about 425 kms and from Hubli about 103 kms. The convenient railway station is at Kumatha railway station on Konkan rail route. Hubli is around 85 kms from Haveri railway station. Hubli airport is the nearest airport to reach the place.