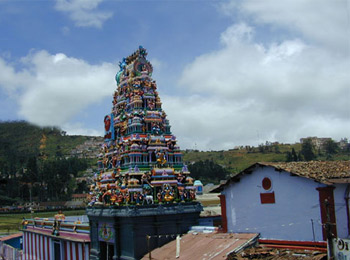 The Mariamman Temple is located near the market in Ooty, Nilgiris District, Tamil Nadu, India. Mariamman is the local deity of the region. It is dedicated to Mariamman.

Mother Durga represents three powers (shakti or energy) called Itcha Sakti, Gnana Sakti and Kriya Sakti. Thre are three deities in the temple representing each of these powers in the form of Mari, Kali and Katteri and this is a rare type in a single temple. Kali, though described furious, is very calm and smiling in the temple.

A thread called Mudikayiru prepared with Mantras in the Katteri Amman shrine is believed to protect the devotee from evil looks, illness, magic spells, witchcraft effects etc. This is mostly used to protect children. Women wear it for child boon. The thread is also used to protect cattle.

An incident is narrated related with the formation of this temple. According to it every Tuesday merchants from Coimbatore came to this region to trade with the local tribals. On one of this day two sisters travelling from north reached market. They had divine look and manner. When they asked for a place to stay, they were told to stay under a nearby tree. They did not know that the sisters were Goddesses. A lightning or flash of light appeared near the tree and the sisters disappeared. Then the people understood that the sisters were divine forms and built a temple for Goddess Kaliamman and Mariamman together. It is the Mariamman temple seen today. It is the only place where both goddess are seen together. Even today people gather at market on Tuesday and worship Goddess Mariamman on their way returning from market.

The 28 day car festival during the whole of February month is the longest and biggest festival of the temple. Mother Aadhi Parasakti comes in procession in different forms as Durga, Kamakshi, Parvathi, Meenkshi, Rajarajeswari, Heddhai Amman and Bhagavathi. Crowd would be in lakhs. During the car procession, devotees throw salt on the deity in the hope that all their hardships would go off as salt disappears in water. The temple would be full of devotees on new moon days, Fridays in the month of Aadi (July-August), Navarathri days in Purattasi (September-October) and other days of religious importance.

Those infected by small-pox and other illness, handicapped, impaired vision pray to Mother Mariamma. The also seek boons of marriage and child.

Realizing their wishes, devotees offer a chicken and black sari to the Goddess. They also offer toy cars, throw salt, cradles, light lamps and feed the poor besides usual abishek and pujas

The nearest airport is at Coimbatore Airport.

The nearest railway station are Coimbatore and Udhagamandalam Railway Station.

The temple is in the heart of Udhagamandalam. The place is 98 km from Coimbatore.