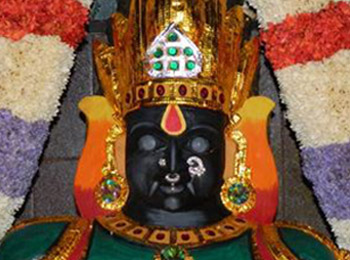 As Ambica is all prominent in the temple, there are no sub-deities in the temple, except Lord Vinayaka under the Arasu tree and Pechi Amman, who appears differently with her left hand squeezing around the neck of a person. Two dwarapalakis located on the entrance of Mariamman shrine.

Sage Jamadagni suspected the fidelity of his wife Renukadevi when she stood wondered at the handsomeness of a Gandharva seeing his reflection in the water. He immediately ordered his son Parasurama to chop off her head which the son obliged but restored her life back with his own powers. She-Renuka Devi is worshipped as Mari Amman.

Mother Durga is but the incarnation of Mother Parasakthi, ruler of the worlds. She created a Shakti from Her body to kill demon Mahishasura of the Yaksha family. Lord Shiva gave her the face, Lord Brahmma the body, Lord Vishnu 18 hands, Yama hair, Agni the eyes, Manmatha the eyebrows, Kubera the nose, Lord Muruga lips, Chandra-Moon her breasts, Indira hip and Varuna Her legs. Thus, she was the combination of powers of all Gods and is praised as Mahishasura Mardhini as she killed the demon.

Though Mariamman and Durga are different from each other, they represent Ambica. To emphasize this truth, they appear as two in a single form. This is a rare of form of Durga-Mariamman.

Ambica appears with all smiles, holding Pasam (rope), Angusa the controlling stick. She is sitting with her right leg folded while the left is half folded pressing Mahishasura on the floor. Though generally some demon is seen under the feet of Mariamman, as the Ambica in the temple is Mother Durga, Mahishasura particularly is seen under Her feet.

Kings used to worship Mariamman before marching on a war. When monsoon failed and drought spread, devotees performed pujas for rain-Mari in Tamil. As She graced the people with rain, people celebrated Her Mari Amman-Goddess of Rain. The name Mari Amman came to stay.

On Thaipusam, float festival is conducted in Mariamman Teppakulam (tank) in a colourful way, which attracts thousands of tourists. The idols of Goddess Meenakshi and her consort Lord Sundareshwarar, the deities of the Meenakshi Amman Temple come down to the tank in colorful floats, presenting a mesmerizing sight. In the month of mid-March to mid-April the grand annual festival is celebrated for continuous ten day.

Mariamman Temple in Madurai holds a separate place in the hearts of Madurai people, the goddess’s power has no limits and she is considered to be the watching guard of Madurai. Nothing begins in this land without worshipping Mariamman. People with eye sore, small pox, seeking child boon and marriage, will be relieved from their ill luck. The abhisheka water in this temple has many magical powers and can cure Small pox, chicken pox and eye problems. And also people with skin diseases offer salt and pepper to the Goddess. On Fridays and Tuesdays devotees light lemon lamps along the plank for better life and fortune.

Madurai airport is the nearest one, it is best to hire taxi from the airport to this temple than taking a bus.

From Madurai junction this temple is at a 30 mins drive, there are both bus and auto facilities to reach this temple.

Buses from Madurai Periyar Bus stand will take you to this temple, or else you can also take taxi.