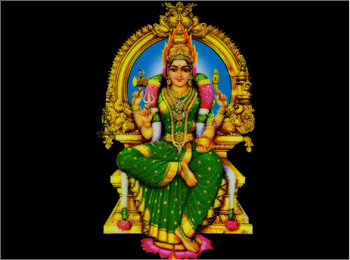 This temple is located outside the Mysore palace fort facing the road dedicated to Mariamma or Parvathi in a more aggressive form. She is the guardian of people from all diseases. People after they are cured of diseases like chicken pox or measles visit the temple and offer tender coconut water on the stone installed in the shrine representing Mariamma. This ritual is known as "thannir yereyuvudu" / pouring tender coconut to cool down the goddess.

The closest airport to Mysore is the new Bangalore International Airport, which is about 170 kilometres away. Bangalore itself is very well-connected to all major cities in India. It takes about three hours by road to reach Mysore from Bangalore. One can take a KSRTC bus, a train or a taxi from Bangalore.

Mysore is very well linked by rail throughout the region and the railway station is just about 2 kilometres from the city centre. There are many express trains between Bangalore and Mysore that cover the distance between the two cities in about three hours. Bangalore itself is very well- associated to most other cities in India. Some of the trains plying between the two nodes include Tippu Express, Chamundi Express, Kaveri Express and Mysore Express.

One can also take the bus from Kempegowda Bus Station in Majestic (near the Bangalore City Railway Station) to Mysore. There are several options of state transport buses as well as private tour operators. Tickets are easily available at the bus station ticket counters.