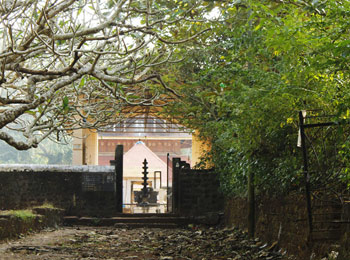 The Mannur Shiva Kshetram or The Mannur Temple is located at a distance of 12 Km from the Kadalundi village in Kozhikode. It is one of the most renowned 108 temples in Kerala and was built by the great sage Parshurama. Perumparambil and Manezhi Illoms were two Hindu families who administered the temple which was later handed over to the Hindu Religious Charitable Endowment Department. 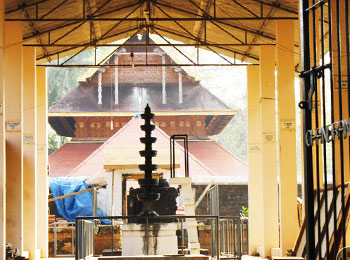 The temple is considered to be a thousand years old although the inscriptions date back to only 400 years. The brilliantly carved and rare Gajaprathista(designed like the back of an elephant) design is more than two centuries old. The temple premises consist of Mahavishnu temple, Chuttambalam, Sastha temple and Karinkali Kavu. The west facing sanctum sanctorum consists of two levels which are accurately and intrictaely calculated. The foundation is embellished with granite and the carved walls are made of red Laterite.

The sanctum sanctorum facing west is constructed at two levels with intricate architectural calculations. The foundation is made of granite and the red laterite stone walls are beautifully carved. Here Lord shiva is depicted as Aghoramurthy, i.e the angry form of Shiva after the Dakshayaga. Sreeparvathi, Dakshinamurthy and Vigneswara are the upadevathas (other deities) in the temple. The temple complex also consists of Mahavishnu temple, Chuttambalam, Sastha temple and Karinkali Kavu.

Parsurama is said to begin his Shiva Linga Prathishtha at Tiruvannur and completes it here every noon. The Puja at noon is considered to be very special. The most important festivals here include Shivrathri and Thiruvathira.

How to Reach Kozhikode

Calicut International Airport (Karipur Airport) which is situated at a distance of 23 Km from Kozhikode is the nearest airport. The airport operates at the national and the international levels. Local vehicles are also available from the airport.

The Kozhikode Railway station is a major railhead and connects the city to other major cities in India via mail and express trains.

The Kerala State Road Transport Corporation has a large number of busses moving in and out of Kozhikode connecting it to major cities in the state. Private buses are also available and function day and night.