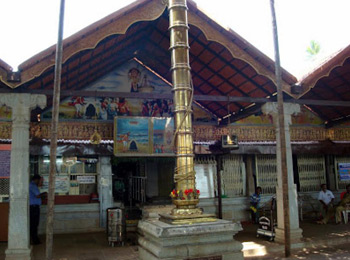 The Mangaladevi Temple is dedicated to Hindu god Shakti in the form of Mangaladevi. The city of Mangaluru is named after the presiding deity, Mangaladevi. The temple is of significant antiquity and is believed to have been built during the 9th century by Kundavarman, the most famous king of the Alupa dynasty during the 9th century under the aegies of Matsyendranath. As per another legend, the temple is believed to have been built by Parashurama, one of the ten avatars of Hindu god Vishnu and later expanded by Kundavarman.

The temple is built in Kerala style architecture, which is common in all temples in the South Indian state of Kerala and Western Ghat. The temple has a two storeyed gopuram or a gateway tower, with the upper storey having wooden trails covering the Kottupura (a hall of drum beating during festivals). A rectangular wall around the temple, called Kshetra-Madilluka piereced by the gateways, encloses all the shrines of the temple. The metal plated flagpost or Dwajasthambam is located axial to the temple tower leading to the central sanctum. The central shrine called Sreekovil houses the image of the presiding deity. It is on an elevated platform with a single door reached through a flight of five steps. Either side of the doors have images of guardian deities called Dvarapalakas. The central shrine has a circular plan with the base built of granite, superstructure built of laterite and conical roof made of terrocata tile supported from inside by a wooden structure. The central shrine is at a lower elevation, with a shrine of Nagar, the snake god, in the elevation. Mangaladevi is depicted in sitting posture as Dharapatra. There is a small Lingam to the left of the icon.

The temple dates back to the ninth century when Kundavarman, the most famous king of the Ahepa dynasty, was ruling Tulu Nadu. During this period, there were two holy saints of the Nath cult, Machindranath and Gorakhnath, who came from Nepal. They reached Mangalore, crossing the river Nethravathi. The place where they crossed the river came to be known as Gorakdandi. They chose a place near the banks of the Netravathi which was once the centre of activities of the sage Kapila. The ruling king met the two saints. Pleased with the humility and virtues of the king, they informed him that his kingdom needed to be sanctified with a temple for Mangaladevi. From their own mother he heard the story of Vihasini and Andasura, Parashurama and the temple built by them. The two saints took the king to the sites where all these historical events had taken place. They asked the king to dig the place and relieve the lingam and the dharapatra symbolising Mangaladevi and install them in a shrine along with Nagaraja for providing protection. Kundavarman built grand shrine to Mangaladevi was built on the hallowed place with the guidance of the sages.

Even today the two temples of Mangaladevi and Kadri, Mangalore have maintained their connection. The hermits of Kadri Yogirajmutt visit Mangaladevi temple on the first days of Kadri temple festival and offer prayer and silk clothes. As per another legend, the temple is believed to have been built by Parashurama, one of the ten avatars of Hindu god Vishnu. During the passage of time, the temple was covered by vegetation and was restored by Kundavarma of Alupa dynasty during the 9th century. There are also views that the temple was built by Ballal family of Attavar to commemorate a Malabar Princess.

Navaratri (dussera) is the time for special pujas performed on all nine days. On the seventh day, Goddess Mangaladevi is worshipped as Chandika (or Marikamaba), on the eighth day the goddess is worshipped as Maha Saraswathi. On the ninth day which is also known as Mahanavmi goddess is worshipped as Vagdevi, goddess for speech, Aayuda puja is performed. All the weapons and tools are worshipped as the day marks the slaying of the cruel demons by the goddess Durga, and Chandika yaga are also performed on this day. A large number of devotees participate in the Rathothsava on the tenth day, which is celebrated as Dussera. The decorated goddess in mounted on the grand chariot and pulled with thick ropes, the procession goes to Marnamikatte where the goddess and the Shamivriksha are worshipped.

How To Reach Mangaladevi Temple

The Nearest Airport is Mangalore.

The Nearest railway station is Mangalore.