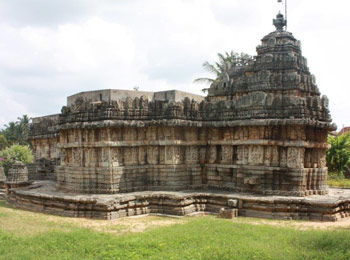 The Mallikarjuna temple is a famous Hindu shrine dedicated to Lord Shiva. The temple is located in Basaralu, a small town in the Mandya district of Karnataka, India. Basaralu lies very close to Nagamangala, approximately 65 km from the culturally important city of Mysore. The temple was constructed around 1234 AD by Sri Harihara Dhannayaka, during the reigns of the Hoysala ruler Vira Narasimha II. This temple is considered an important national monument and is preserved by the Archaeological Survey of India (ASI).

The temple is known for its splendid architecture. Apart from the usual Hoysala type of sculptures pertaining to that region, the temple also houses many sculptures that are considered master piece. The inner most sanctum of the temple is the garbhagraha designed in the Dravidian Shikhara style and consists of a Balahari Linga, which represents the primary deity Lord Shiva. The ceiling is beautifully decorated with a lotus design. The idols of ‘Naga and Nagini’ (male and female serpent God) sculpture are installed within a separate smaller sanctum which lies opposite to the shrine of ‘Surya Bhagwan’ (Sun god).

The top of the temple has the Shikhara and Hoysala emblem – Sala killing a Lion, whereas its base is made up of six layers of intricate pattikas starting with war elephants at the bottom. The horse riders are found above it. The hoysala emblem and scenes from epics like the Mahabarata, Bhagavata and Ramayana are depicted in the middle layers. The top most layer has swans. Despite not being ad attractive as the Malligarjuna temple, The Chandikeshwara temple is also a must see when it comes to its architecture. The garbhagriha of this temple has a superb Bhairava sculpture, opposite to which is a 20 foot pillar.

The walls of this temple are adorned with beautiful sculptures of Lord Ganesha, Keshav, Shanmuga and Shiva. Various sculptures depicting a 22 armed image of Lord Shiva killing the demon Andakasura, Shiva and Parvathi riding the Nandi, Vishnu riding Garuda, Ravana lifting the Kailasa, Nataraja, Harihara, Samudra Manthana, Kalinga Mardana, Hayagreva (god with a horse head), Yoganarashima, Lakshminaryana, Dancing Lakshminarashima, Vamana, Draupadi with a garland, Lord Brahma, 18 armed Durgi, Bhairava, and many more are found in this temple. The ceiling of the Ardha Mantap is intricately carved with images of the Ashtadikpalas.

It was built in the 13th Century by Harihara Dannayaka, who was in charge of the armies under the Hoysala King Narasimha II. The temple is currently maintained by the Archaeological Survey of India (ASI).

Regular trains are available from many major cities of the country to Mandya.

Mandya is well connected to other major cities of the country via regular buses.