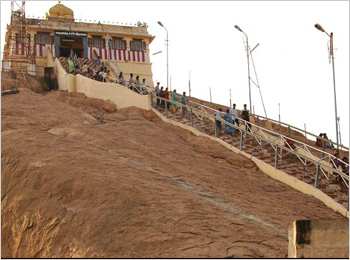 Rockfort temple stands tall on a magnificent hill which is believed to be 3500 million years old. This temple dates back to 7th century. This hillock forms the landmark of bustling Trichy town.The shrine is at a height of 273 ft and you have to climb over 400 steps to reach the pinnacle. One has to cross Sri Thayumanavar temple, which is located half way to the peak. Though the climb is a bit difficult, the soothing cool breeze gears up our energy to climb without much strain. A panoramic view of the entire Thiruchi and Srirangam Temple from the Uchi Vinayakar temple is just amazing.

The Rock Fort temple complex in Tiruchirappalli is a collection of three temples – the Manikka Vinayaka temple at the foot of the hill, the Uchhi Pillayar Koyil at the top of the hill and the Taayumaanava Koyil (Shivastalam) on the hill. This Shivastalam is a rock cut temple on a hill in the most prominent landmark in Tiruchirappalli (Trichy); reached by a flight of steps on the way to the famous Ucchi Pillaya temple. 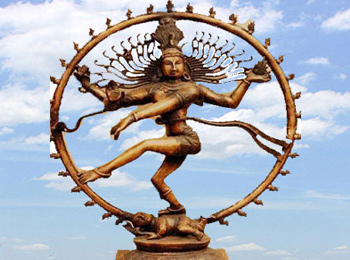 Tiruchirappalli, was earlier known as Thirisirapuram, as a Rakshasa called Thirisiran worshipped Lord Shiva here. There are also stories that since there are three peaks on Rock Fort, occupied by three Gods Shiva, Parvathi and Vinayakar (Uchi Pillaiyar), the place was called Thiri-sikarapuram and later called Tirisirapuram.This place was also known as Sirappalli, Rishabachalam & Dhakshina Kailasam during ancient days.As per the mythology, once there was a great tuffle between Aadhiseshan and the wind God Vaayu, on who is more powerful. Aadhiseshan encircled the Maha Meru hill (Himalaya) and challenged Vaayu whether he can take Himalayas off his clutches. Vaayu tried much and accepted his defeat.It is said that during the fight, 3 pieces of the mountain broke and flew off to different places. Out of the 3 peices which flew off, one is this Rock fort at Trichy. The other two are at Triconamalee (Ceylon) and Sri Kalahasthi (AP). 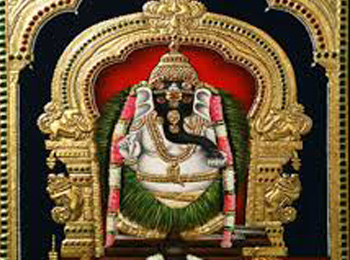 The hill fort was built during the rule of Mahendra Pallava-Gunaparan during the sixth century according to epigraphic evidences. Rockfort or Ucchi Pillayar koil, is a combination of two famous 7th century Hindu temples, one dedicated to Lord Ganesh and the other dedicated to Lord Shiva, located a top of a small rock in Trichy, India. Geologically the 83m high rock is said to be one of the oldest in the world, dating over 3 billion years ago, and mythologically this rock is the place where Lord Ganesh ran from King Vibishana, after establishing the Ranganathaswamy deity in Srirangam. Perhaps its most famous temple in the city is the Sri Ranganath Swami Temple. The full account of the temple's idol have been collected in the Sri Ranga Mahatmya. Here is the story as presented in that sacred text: The Rock Fort temple stands 83m tall perched atop the rock. The smooth rock was first cut by the Pallavas but it was the Nayaks of Madurai who completed both the temples under the Vijayanagara empire.

The temple complex is composed of two parts: a Shiva temple (Thayumanaswamy) carved in the middle of the rock and a Pillayar (Ganesh) temple at the top portion of the rock. The Shiva temple is the bigger one, housing a massive stone statue of Shiva in the form of Linga along with a separate sanctum for goddess Parvati.The Sivalinga here is huge and around 6 feet high . There are shrines for Somaskandar, Nataraja- Sivakami, Subramanya, Vinayagar, Durgai and Kalabairavar. Lord Jeerakeshwar is special to this temple and he is adorned with sandal paste and it is believed that worshipping him would cure many ailments.There is a huge mandapam just outside the Tayumanavar sannidhi and it has exquisite paintings of the legend associated with the temple . The tower of Amman sannidhi can be seen at close quarters from this hall.Amman sannidhi is few steps below the Siva's sannidhi and the dwajasthambam and Nandi mandapam are also there in this level. Photography is prohibited inside the temple. In between the Tayumanavar temple and Ucchipillayair temple lies the Pallvas cave and is a store house of brilliant art work.

The temple is mystic in its nature with an awe-inspiring rock architecture. The Ganesh temple is much smaller with an access through steep steps carved on the rock and provides a stunning view of Trichy, Srirangam and the rivers Kaveri and Kollidam. Due to its ancient and impressive architecture created by the Pallavas, the temple is maintained by the Archaeological department of India.

At the very entrance, at the foot of the Rock, we find lord Manikka Vinayakar seated in all his majesty, ready to confer his Blessings upon his Devotees. It looks as if nobody can reach the Temple of Lord Thayumanavar or Ucchi Pillayar, without first worshipping him and obtaining his blessings. The spacious Hall on the Western side contains pictures and carvings of Vinayaka in different names and postures.

The circular Pyramed-like structure on the top of this samll temple. VIMANAM as it is called, is recently gold- plated adn adds to the general solemnity and loveliness.

Devotees including all the Merchants and Shopkeepers and Employees of this busy area flock to the Temple in hundreds. Archanas are preformed throughout the day. Abishekarms are performed twice a day and processions of the God round the temple are conducted Chathurthi Days. To sum up in one word, Manikka Vinayakar is the Patron Deity of the Town.

Lord Thayumanaswamy and his consort Goddess Mattuvarkuzhal are found in this temple. Lord Ganesh called is Lord Uchi Pillayar shrine is on the hill top and Manickam Vinayakar shrine is at the hill. Lord Brahma in the form of Lord Jureswarar.

As per this Legend their was women called Ratnavati who was an ardent devotee of Lord Shiva. She stayed in the northern banks of river cauvery. She became pregnant and while the time for delivery was nearing she requested her mother to come to her place for help. But her mother had to cross the river cauvery which was in spate. Ratnavati prayed to Lord Shiva and her mother appeared before her. She was very glad to see her mother by her side and soon she delivered her baby safely. Later the floods receded and Ratnavati's mother visited her and surprisedly enquired how she had managed all alone during childbirth. Only then Ratnavati realised that it was Lord Shiva himself who had come in disguise as her mother to help her. Hence Lord Shiva here is called as Thayumanaswamy and thousands of people visit this temple to offer their prayers for a safe childbirth.

King Vibhishana thus started his journey towards Sri Lanka. When he reached Trichy he was amazed by the beautiful course of river cauvery and he wanted to take a dip in the river. Since the idol should not be placed on the ground he was hesitantly looking for help. At that time he noticed a young boy near the river. The King requested the boy to hold the idol and cautioned him not to place it on the ground. The boy was in a hurry thus he told the king that he would count till 10 and at the count of 10 the king should comeback and get the idol from him. If the King failed to do so then the boy warned him that he would place the idol on the ground. The King agreed to the boy's condition and went to the river for a dip. The boy started his count and waited for the King. The King was totally fascinated by the river and he failed to heed to the boys count. The boy after counting till 10 placed the idol on the ground.The Lord Ranganatha idol instantly grew into massive size and was deeply rooted on the banks of the river. King Vibhishana hurriedly came back from the river but was too late. He tried moving the idol but in vain. Angered by the boy's act he started chasing him. The boy ran to the top of hillock and rested there. The King followed him and knocked him on his forehead. Instantly the young boy took the form of Lord Ganesha. Hence the Lord Ganesha is called as Uchi Pillayar and one can see a pit in the forehead of the idol even today. The Lord Ganesh then blessed King Vibhishana and told him that the idol was destined to be here.

A noted saint associated with the Temple is Thayumanavar. He was the Son of an Accountant serving under King Vijaya Raghunatha Chokkalinga Nayakkar. Though he followed his father's profession, from his early years he was bent on spirituality. One day he saw Saint Mauna Guru and felt a thrill in his heart. He fall at his feet and was accepted as a disciple and at once he began to sing a devotional song. He had composed 1456 songs in all, noted for devotion adn spirituality, and guidance to the world.

Devotees perform abishek to Lord Vinayaka with milk and offer garlands made of a grass called Arugampul.


The cave temple has a doorway, which is lead to Uraiyur. There is a "pit" on the top of his forehead, believed to have been created when Vibhishana hit him on the head in anger for placing the idol. It is believed that the same idol placed by Lord Ganesh on the ground is today the presiding deity of Famous Srirangam Ranganatha Swamy Temple in Trichy.

Lord Brahma in the form of Lord Jureswarar who cures fever. Thayumanaswamy thousands of people visit this temple to offer their prayers for a safe childbirth.

Any undertaking whether domestic, religious or professional, started after praying Lord Uchi Ganapathy is sure to go progressively, profitably and happily.
All Saivite saints, Gnanasambandar, Appar, Manickavasagar, Thayumana Swamigal had sung the glory of this sacred land.

Trichy has an airport, 7-km away from the city and is connected by regular flights with Chennai, Madurai, and Bangalore.

Trichy is an important junction on the Southern Railway. It connects Chennai, Thanjavur, Madurai, Tuticorin, Tirupati and Rameswaram on the metre gauge, and Bangalore, Coimbatore, Cochin and Mangalore on the broad gauge.

Trichy is connected by road to Chennai (320-km), Madurai (124-km) and to all major towns in South India by regular bus services.