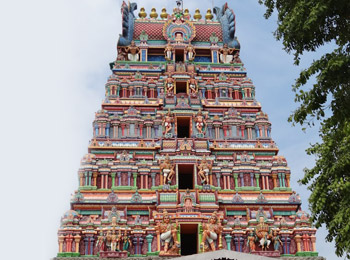 Mailam Murugan temple is a famous Hindu temple dedicated to Lord Muruga. The temple, situated on a small hill, is connected with a village on the Coromandel Coast, Bomayapalaiyam, very near to Pondicherry, where a Vera Saiva mutt is found. According to the name, bomma or bomme, derived from brahmana. This was a village donated to Brahmans, as is confirmed by the sthala Purana in which Bomayapalaiyam is also named Brahmmapuram. 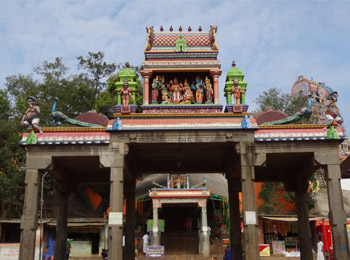 The temple atop the hill was built by Pommayapuram Madadhipathi on a grand scale and its maintenance has been commendable. The Mutt established at the foot of the hill attends to the temple administration in an exemplary manner providing conveniences to the visiting public. To reach the temple on the top of the hill we can climb by footsteps by bare foot (750 meters) or by the vehicle (1 km or 2 km). There is a temple tank which is 1000 years old. In this tank Balasiddhar took holy dip.

Several features in the iconography of the Mailam temple testify to this duality. The temple possesses two processional chariots that are used for the Brahmotsavam in Panguni. They are decorated with sculpted panels representing diverse forms of Siva: Biksatana, Gajasamharamurti, Kalantaka, etc., and Sarasvati Kama, Krishna, among other deities of the pantheon. The other panels, linked with local history, are of two types. There are, first, panels connected with both Murugan and the mutt and, second, panels relating solely to the mutt.

Two panels represent episodes of Sankhakanna fighting against Siva, and then against Murugan. In the first scene involving Siva, the representation deviates singularly from the story. Siva, bearded and wearing a turban, is in the process of copulating with his consort, while Sankhakanna, the guardian's club in his hand, reaches up to "save" the latter and pulls her by her hair. The second scene is more allusive and the wives of Murugan do not appear: only Murugan seizes the guardian who joins issue, his arm raised as a sign of combat.

It is certainly because Sankhakanna is reincarnated as a young child that the birth of Murugan is represented. This is a rare scene, with the exception of Darasuram where amidst reeds; his place of birth, the baby god is taken by Siva, who returns him to Parvati. In the next scene, she is giving him her breast.

In Mailam, the Krittika-s holds six small Murugan’s in their arms, seated on lotuses. On a third panel, between Parvati and Nandikesvara as worshippers, Siva is standing, bearded and armed with his trident, the kettle-drum and fire, and holds the child Murugan on his arm.

Another type of representation, also quite rare, is Murugan teaching, a form of the god related to his activities as well as those of the head of a mutt. One scene is on Ganapati chariot and another on that of Murugan. In one case, Murugan is seated on a pedestal with a book in his hand, giving a lesson to Siva, who is standing with joined hands. In the other, Subrahmanya, again on a pedestal, is making the gesture of teaching in front of Siva, who stands in respectful attitude of listening, one hand before his mouth.

A third representation is the illustration of a passage from the Tamil Skanda Purana recounting the incarceration of Brahma as a consequence of his inability to recite the Vedas. The prison is a frame spiked with thorns in which Brahma is held, kept watch over by a mustached guard, dagger in hand. Next to this, a walking Subrahmanya is in the process of imprisoning Brahma.

Five panels bear Veera Saiva figures. On the first panel, the identity of one of them, who is wearing a tiara and seated on a throne beneath a canopy, is engraved in Tamil on a step of throne: Alamma Prabhu. The latter was a spiritual master from the twelfth century known for his ascetic rigour and was contemporaneous with Basava.

On the adjacent panel, three men standing with joined hands are certainly worshippers of Alamma Prabhu. The inscription, Prakas'a Praveśa Valaya, must be the name of the central personage, who is larger than the two others.

On the third panel, a sage is seated on a throne beneath a canopy. He has a beard and moustache and long hair scattered on his shoulders and wears around his neck a necklace of rudrakśa and a linga. One hand is in abhaya-mudra and the other holds the linga of the Veera Saiva-s. Beneath is an inscription: "Bala Siddha Sankhakannar", confirming the assimilation of the two personages. It is dated to 4245 of the Kali era, that is, 143 AD: this is obviously a mythical date suitable for a founder.

On the fourth panel, a Siddha, flanked by two worshippers, is seated with crossed legs on a throne in the form of recumbent lion. He has the chignon of an ascetic, a moustache and beard and wears a linga around his neck. The inscription gives his name: Pavala Cuvami and the date are 3245 of the Kali era, or 1143 AD, which is more or less the period of Basava and of Alamma Prabhu. As the dates, ten centuries in the past, are similar, it is possible that the second, historical, date had determined the choice of the first.

On the last panel, a figure is standing, dressed in a dhoti, shoulders covered by a large scarf. He has rudrakśa-s and a linga around his neck and is wearing the sandals of an ascetic. He is holding the staff of the pontiffs and near to him are offerings placed on a low table. The inscription indicates that it is matter of the installation (makuta Abhisheka) of the eighteenth Balaya Swami. The date in Arabic numerals is 25.2.28, quite obviously 1928, as it is known from the documents of the mutt that he died in 1965 and that he was succeeded by the present pontiff, the nineteenth, who was installed in 1965. 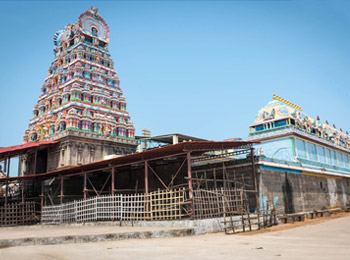 The legend of this Kshetra begins with the end of Surapadma atrocious rule and his tearful appeal to Lord to accept him as his mount. According to Sthalapuranam, Surapadma, though fought against Muruga with all his might combining the tactile of asuramayopaya, was routed in the end. When he was about be slain, he appealed to the Lord to accept him as his vehicle, and he would serve him with fidelity. Moved by the tearful appeals, the Lord ordered him to do meditation with great steadfastness taking the shape of peacock (Mayil in Tamil) on the bank of Varaha near Mayilamalai. Nodding, he continued his appeal to the Lord to dwell for ever on the same hill. It was granted. Thus came into existence this Mayilamalai and the place called Mailam, for short.

There is another long legend associated with the life Sankhakannar, one of the Sivaganas of Kailas. Due to incurring displeasure to Lord Siva, he was cursed to be born as man in bhuloka and to get emancipation after due penance only.

According to the sthala Purana of Mailam, it was the duty of Sankhakanna, a gana in Siva’s following, to stand guard at the grove where Parvati was bathing. He failed in this task as he did not prevent Siva from entering and, because of this, he was cursed by Siva, who announced that he would have to fight with Murugan and teach the vedasaivagamas for many years.

Having been thus cursed, the gana, in the form of a young child named Balasiddha, descended to earth, to the village of Bomayapalaiyam. Knowing that he could be liberated only by Murugan, and following the advice of Narada, he went to Mailam, the hill whose name is linked to the peacock of the god (mayil), for it was there that the Asura Surapadma assumed the form of a peacock so as to obtain liberation from Murugan.

Despite the intervention of his consorts, Valli and Devasena, Murugan refused to do away with the malediction weighing upon Sankhakanna because it had come from Siva. By way of reprisal, Murugan’s consorts slipped away from him and became Siddha kannis (abstinent ascetics), taking refuge in their palace. Disguised as a hunter, Murugan attempted to enter the palace and confronted Sankhakanna. The guardian very soon recognized the god, who immediately rid him of the curse and asked him to remain on Mailam hill. Murugan married Valli and Devasena, and Sankhakanna, for his part, asked Murugan to always remain present at Mailam with his wives in the form of bridegroom (kalyana kolam).

According to this account of the sthala Purana, it appears that Sankhakanna is an Asura created for the occasion, an Asura with neither personality nor consistency. He may simply be one among the numerous gana’s blowing conches, as is very common on the wooden chariots. Moreover, his story is borrowed from another one, that of Ganapati, guardian of Parvati's privacy.

In fact, this is the classical from of any, Asura to whom the god, in his avatara form, accords liberation subsequent to violent combat. Most important is that Sankhakanna is explicitly said to be Balasiddha. This is the main link which, notwithstanding a mythical presentation shows that the temple was created by a head of the mutt. The conclusion of the sthala Purana is clear in this matter: Balasiddha also asks Murugan to remain as Kalyana Kolam in Mailam and in Bomayapalaiyam, in the mutt created by him.

The Panguni Uthiram festival held in March - April fascinates a large crowd of devotes from all over Tamil Nadu.

Pondicherry Airport(PNY) is a nearest airport located around 30 kilometer away from Mayilam. Mayilam Railway Station is located on the Chennai–Tindivanam main line of the Southern Railway. There are frequent bus services available to Various places in Tamil Nadu, Andhra Pradesh, Karnataka, and Pondicherry states from Tindivanam (kooteripattu) Non-stop bus services and express bus services are also available to major cities like Chennai.