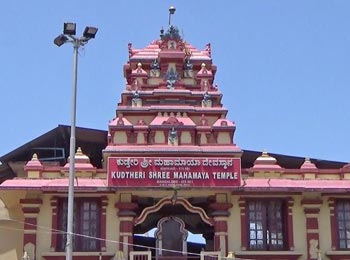 The Kudtheri Sree Mahamaya Temple is located in Mangalore. The presiding deity is ‘Kudtheri Sree Mahamaya’ along with Shri Venkatramana, Shri Srinivas, Mahalaxmi, Mahalasanaryani, Shri Chandramaulishwara and Raktheswari Amma. The temple is crowded during Noon Pooja and the food is served for pilgrims every day after the pooja.

The temple was renovated and Puna Prathishta has been done by H. H. Shrimat Sudhindra Thirtha Swamiji of Kashi Math on 15th February’ 2000. The Shree Mahamaya Temple is one of the oldest temples in the city and worships Goddess Shakti. History says that the idol of Goddess Mahamaya installed in the Temple was brought from Kudtheri village in Goa in the 16th century by the GSB community. It was owing to this reason that the temple was set up close by the Sri Venkatramana Temple at Car street.The tank in front of the temple called Shri Mahamaya Tirtha, is the largest tank in the city. It attracts crowds of devotees to witness the immersion of clay idols of Ganesha during Ganesh Chathurthi & Sharada during Navratri Festival.

Car Festival Phalguna Shuddha Padya to Shasti (Six Days) (February / March) and Navaratri – Ashwija Shuddha Padya to Dashami (10 Days) (October) are the main festivals here. The famous Shri Venkatramana temple is only 100 Yards away from Shri Mahamaya temple. Many of the festivals & Utsava of both the temples are celebrated together especially on the following occasions when the deities of both the temples go together.

How to Reach Mangalore

The Mangalore International Airport is situated 20kms from the main city. Two major railway stations by the names of Mangalore Central and Mangalore Junction along with other stations make city access very easy. This city is well connected by road to other cities and can be reached using car or bus.