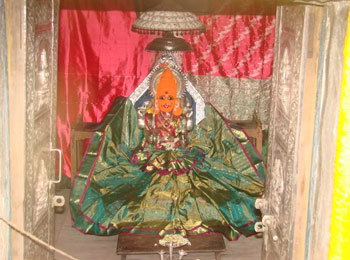 In the Karimnagar District (Telangana) lies the village of Manthani. The village has a lot of temples most of which were built in the Kakatiya period. Some of the temples built around that period are Lord Saileshwara Temple, Laxmi Narayana Swamy Temple, Mahalaxmi Temple, Gautameswara Temple, Vinayaka Temple, Dattatreya Temple, Saraswati Temple, Ramalayam Temple, Panchayatanam Temple and the Omkeshwara Temple.

The 250 year old Mahalaxmi Temple is one of the most important temples and is located on the banks of a small lake known as Ravula Cheruvu. The temple worships Goddess Laxmi who is known as the goddess of wealth. The Goddess stands on a stone slab and is shown holding a dagger, a kumkuma bharine, a lotus and a chakra in each of her four hands.

A magnificent door was recently constructed and plans for covering the doors with silver sheets. A lot of people are contributing to raising the funds for the temple. The temple attracts a large number of devotees on the Devi Navaratri Utsavams, besides bhajans, poojas and weekly poojas and during Fridays.

The Rajiv Gandhi International Airport in Hyderabad is the closest Airport.

Manthani is well connected by bus routes from all major cities of Telangana.