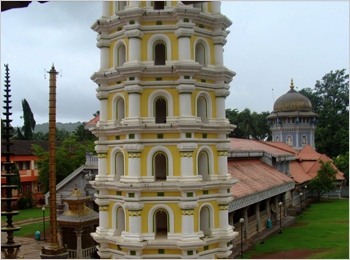 The temple of Mahalsa Narayani is situated in a small village, Mardol. This temple is about a kilometer from the famous Mangueshi temple and around 22 kms from Panaji, the capital of Goa. Every year lakhs of devotees and tourists throng the 450-year old temple to seek blessings of the divine deity. 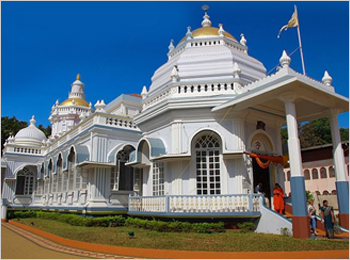 The Narayani temple of Mardol has some exclusive features to its credit. It has the tallest Samai (lamp) or the Dnyandeepa, and the Deepasthambha, which is well-known all over the world; Sabha Mantapa made of complete-granite, copper roof to the main temple, historic bell with legal sanctity and many more fascinating things. A very extraordinary feature in Mardol temple is the site of the goddess of Shri Mahalasa in various Alankaars at various periods, sometimes during various times of the day. To the sincere devotee, she appears as various Gods and Goddesses and Special Puja Offerings can be made to the deity. 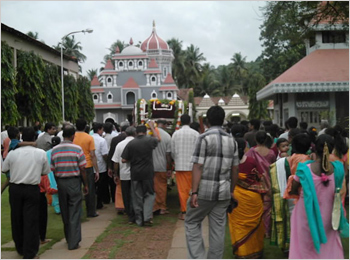 Mahalsa is a Hindu goddess. She is revered in two distinct traditions. As an independent goddess, she blesses the devotees in the form of Mohini, the female avatar of the god Vishnu and as the spouse of Lord Vishnu called Mahalasa Narayani. Mahalsa is also revered as the consort of the local deity Khandoba, a form of the Lord Shiva. According to this belief, she is associated with Parvati, Shiva's wife as well as Mohini. It is also understood that she is a manifestation of Parvati with the beauty of Mohini as per Lord Shiva's request. In the form of Mahalasa Narayani, Mahalasa has four hands, each holding a Trishula, a sword, a severed head, and a drinking bowl. She stands on a man or demon, which is seen lying down, while a tiger or lion licks blood dripping from the severed head. She is also seen wearing the yajnopavita (sacred thread), which is normally seen on male deities. This deity is venerated as a young girl in the morning, as a maiden in the noon and as a woman in the evenings. Goud Saraswat Brahmins and Vaishnavas from Goa and South Canara recognize her as Mohini and call her Narayani and Rahu-matthani, the slayer of Rahu, as mentioned in the Bhavishya Purana. According to the legend of Mohini avatara, the ocean of milk was churned by the gods and the demons, to procure the elixir. Once the elixir appeared, the demons got hold of the pot containing the amruta (elixir of immortality) to share it amongst themselves and not with the gods. Seeing this god Vishnu took the form of the enchantress, Mohini and told the demons that she would distribute the elixir amongst the gods and the demons. The demons were blown by her beauty and readily accepted to what she said. Mohini tricked the demons and distributed the elixir to the gods. Mohini is worshipped as Mahalasa Narayani or Mahalasa. 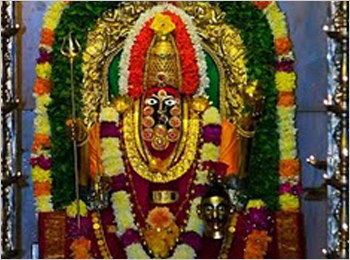 It was noon with the sun was blazing hot above. The Shepard boy was resting under a tree enjoying the coolness watching the cattle which were grazing. He stood up to gather his herd to take downhill in order to water them. He was calling them, when a sudden flash of light appeared from which emerged a radiant figure of goddess. He was awestruck trying to figure what was happening. The heavenly lady approached him and spoke to him. Her voice was that of a deep humming sound coming from all around and from the depths of the valley. She expressed her wish to settle in that place and wanted to speak to the person who owned it. She told the shepherd to bring the landlord. But the boy handling the cattle replied back stating that he had to water the cattle. Hearing his reply, the Goddess casually hit the earth with the Nupur in her toe and with that gentle flick, a gush of crystal clear blue water sprang up from under that solid black laterite rocky earth. "Let your cattle have this water to drink. Now you can go and call your landlord". The cattle boy hustled down the hill to bring his landlord. The landlord was not at home. The son-in-law of the house, Mhal Sharma, heard about what the shepherd said and accompanied him up the hill. At the vision of the stunning vision of the Goddess, luminous in a cool pearly areola of thousand moons, he prostrated on the earth in total submission. He heard her speaking unto him in the same melodious resounding voice. "I want to stay right here, at this place. Dig up at this spot and you will discover an idol of me. Build a temple at this place for me to stay in". And in a flash, She disappeared.As the legend has it, Shree Mahalasa came to Vernem plateau on that day. The tale continues to be passed from generation to generation. A tank with a constant flow of water, existing from times unknown, on the hillock of Vernem in the locale where once stood a glorious temple of Shree Mahalasa, is known as Nupur Tali or Nupur tank deriving its name from the tale. The temple dedicated to Goddess Mahalasa had been located on the plateau of Verna village in Salcette taluka from early times long before the arrival of the Portuguese rule in this part of Goa.Its mythical reference is mentioned in Skanda Purana.  It is the biggest of all Puranas and is believed to have been written between seventh and ninth century CE. In this Purana, there are two chapters titled “Varunapur Mahatmya” and the legend of Shri Mahalasa of Varyenapur is recounted in these two chapters.It is believed that Parushuram got 10 Saraswat families in Gomantak from their settlements in Trihotra in the North. These 10 families got with them their family divinities which are:Mahalaxmi, Mangueshi, Mahadeva, Mahalasa, Shantadurga, Nagesh and Saptkoteshwar.Later, more Saraswat families settled at Goa and they too got with them their own family deities.Overall, there were 66 families which established in Salcette taluka. Of them, six families settled in Varyenapur or Varunapur (old Mhaddol), generally known as Vernem during Portuguese rule and Verna now.

The Shri Mahalasa Saunsthan, Mardol, has 26 two-room blocks and four three-room blocks, all with an attached toilet and bathroom. Each room is provided with one cot, two mattresses with pillows.

The airport is located at Dabolim, which is 30 km  from Panaji or Margao.

The nearest railway station is Karmali or Old Goa, on Konkan Railway, from where one can take bus or taxi to Mardol, the other main stations in Goa being Madgaon, Panaji, Vasco Da Gama and Sanvordem.

The temple of Shri Mahalasa is situated on Mardol ward of Priol Village of Ponda taluka. It is on the National Highway No: 4A (now bypassed) which connects the cities of Panaji to Ponda and Margao. The distance from Panaji to Mardol is 21 km and along the same route, it is nine km away to Ponda. Many inter-state government-run and privately operated buses travel through Mardol.