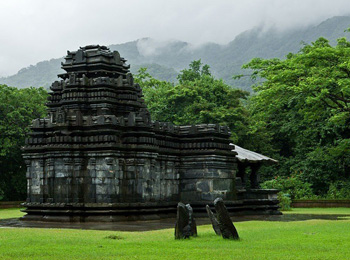 The deity of God Shiva is worshipped at Shri Mahadev Temple located at Tambdi Surla in North Goa. Mahashivratri is the only festival celebrated with great joy in the temple. The people from nearby villages gather to celebrate this holy festival. The temple dates back to the 12th century and was constructed in the Bagwan Mahavir Wildlife Sanctuary nearby Tambdi Surla village. It is one of the oldest temples in Goa which has survived over years, despite the Mughal and Portuguese invasions as it was constructed inside a dense forest. This temple is now maintained by the Archeological Survey of India.

As per the history, this temple was constructed by the Kadamba Queen named Kamladevi and therefore it depicts the Kadamba-Yadav architecture. The temple survived over the years and during the reign of different rulers due to its remote location.

The temple is built with grey-black basalt in the Hemadpanthi style, making it weather resistant. It is believed by some that the stone is grey black talc chlorite schist soap rather than grey-black basalt and was fetched from the Deccan Plateau. The condition of building of the temple has remained the unchanged over the years due to its superior quality of stone.

The temple is constructed in a unique way comprising of an Antarala, Nandi Mandapa and Garbhagriha. The Nandi Manpada consists of four pillars that are beautifully carved with elephants and are built to support the stone ceiling that is decorated with a carving of lotus flower. The panels at the side of the temple contain extraordinary carvings of God Vishnu, God Shiva and God Brahma. The deity of headless Nandi is installed in the mandap while the deity of God Shiva is enshrined in the inner sanctum along with Linga. The Garbhagriha is enclosed by three tired tower with half-finished top. The temple is located beside river Surla which adds to the beauty of the Mahadev Temple.

The festival of Mahashivratri is celebrated with great joy every year by the devotees.