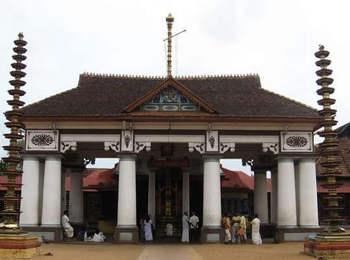 Ernakulam Shiva Temple is one of the major temples of Kerala, located in heart of Ernakulam, the downtown area of the city of Kochi. The temple, dedicated to Lord Shiva, is considered as the city temple, with the presiding deity as the protector of the city, as per local Hindu faiths and traditions. As per the common practice in Kerala, the deity is reverently called Ernakulathappan, which means Lord of Ernakulam. The temple is located within the Durbar Hall Ground. The temple history itself has deep association with history of the city and was one of the 7 royal temples of Kochi Maharajas. The temple in its current form was built under active patronage of Diwan Sri Edakkunni Sankara Warrier in year 1846 and raised it level of a Royal temple in the Kochi Kingdom. The temple is built on 1-acre (4,000 m2) land. The temple is one of the major Shiva temples in Kerala

The existence of temple was first mentioned in Sangam Literature as one of the major temples under Chera Dynasty. Cheras were ardent worshipers of Lord Shiva. When Chera dynasty ended, the place fell into the hands a few Nair nobles who renamed the place as Ernakulam (corrupt form of original word- Eere Naal Kulam meaning Pond with water always) in recognition of the famous sacred pond of this temple. Soon this area came under reign of Kochi Kingdom. The Kochi Rulers, due to the siege of Fort Kochi by the Dutch in the 17th century, moved their capital to Ernakulam and established a Palace close to this temple, facing the temple pond (The Tank Shed Palace seen behind current Durbar Hall). This helped the temple to gain prominence, due to royal patronage. The temple deity was declared as protector of Ernakulam city (Nagara Devata), which was one of the major reasons of contention between Edappally Nair Lords who were the traditional feudal lord of the town and the Kochi Maharajas.

The second phase of the temple came in 1842 when Diwan of Kochi, Sri Edakkunni Sankara Warrier felt the need to renovate the temples which were in dilapidated condition. Works were started in 1843. Two new Gopura Mandapams (Entrance Towers) were constructed in traditional Kerala style similar to Sree Poornathrayesa Temple of Tripunithura which was the Chief Royal temple of Kochi Maharajas. The new temple complex was opened to public in 1846. The temple was elevated to a royal temple and brought under direct administration of Kochi Government's Devaswom Board. In 1949, when Kochi acceded into India Union, the Devaswom Board came under new Government's control, which still remains.

As part of increasing local participation in temple management, the Ernakulam Kshetra Kshema Samithi consisting leading Hindu members of Ernakulam city did participate in the fund collection to purchase the land adjacent to the temple. They purchased the property which was in the possession of Corporation of Kochi. The activities of Ernakulam Kshethra Kshema Samithy did good to the overall development of the temple.

Cheranalloor Kartha Family of South Chittor was the founder of Ernakulam Siva Temple. As per the devaprasna this temple has a connection with Vaishnava.Jadavedan nampoothiri was the swamiyar of Ernakulam Siva Temple and Thiruvananthapuram Shri Padmanabhaswamy Temple. He was a member of Cheranalloor Kartha Family of South Chittoor The temple's legend is deeply associated with Hindu epic Mahabharata. Arjuna, the 3rd Pandava made a severe penance to propitiate Lord Shiva. Pleased with Arjuna’s devotion Shiva accompanied with his consort Sri Parvathi set out from their abode at Mount Kailash to meet Arjuna.

Shiva intends to impress Parvathi with the devotion Arjuna has towards him. Shiva disguises himself as "Kiratha" a tribal hunter before appearing before Arjuna.Just as Shiva appears before Arjuna he sees a wild boar charging towards Arjuna and shoots an arrow at the boar. Arjuna, who is an accomplished archer, also shoots an arrow at the boar. The boar that was in fact a demon named Mookasura in disguise is killed and its original form is revealed. However, dispute arises between Arjuna and Kiratha as to who is the real killer of the animal. A battle ensues between the two, lasting a long time, ultimately resulting in Kiratha’s victory over Arjuna. The vanquished Arjuna, unable to even stand up makes a Shiva Linga out of mud and performs a pooja offering flowers. To his surprise, he sees that the flower he offers over the Shiva Linga is falling over the head of Kiratha. Arjuna then realises that Kiratha is none other than his Lord Shiva. Pleased with his devotion and sincerity, Lord Shiva granted Pashupatha Arrow to Arjuna. Arjuna left this place and soon this area was covered with dense forest, uninhabited for long time. The existence of the Shiva linga made by Arjuna also disappeared from memories of all.

Centuries later, a boy named Devala who has been cursed by a sage, now has a body of a snake, crawled into this forest and saw this lingam completely submerged into mud. He worshiped this lingam as part a deep penance in hope for redeeming from the curse. Soon a few people spotted this mysterious man with body of snake and called him as Rishi Nagam (Saint Serpent) and feared even to come near to him. Some even tried to thwart him with sticks etc. Unmoved by all these action, Rishi Nagam continued his severe penance. Finally Lord Shiva and Parvathi appeared in their original form and asked the sage to take a dip in the nearby pond. As soon as he immersed, he was redeemed from the curse. Soon a new idol appeared just near to the original lingam. Based on this legend, the place got its new name, Rishnagakulam (The pond of Rishi Nagam) and the temple was constructed by the public.

The Uthsavom (temple festival) of Shiva temple is one of the grandest festivals in the Kochi city, normally celebrated during December–January time.

How To Reach Mahadeva Temple