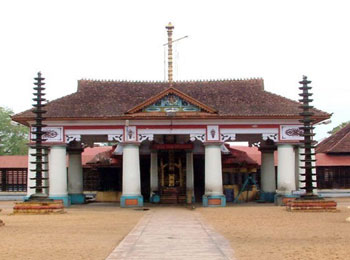 Chengannur Mahadevar Temple is one of the oldest and famous temple, situated in Allappuzha dist. (Kerala). It is a extensive temple complex with a round Sanctum. The The temple was built centuries back based on thearchitectural design developed by the famous Perunthachan. The temple complex was damaged by fire In the 18th Century and was restored later by Vanghipuzha Thampuran, except for the performance hall (KUTHAMBALAM).. This could not be renovated to its original position as it had been designed and constructed by Perunthachan. 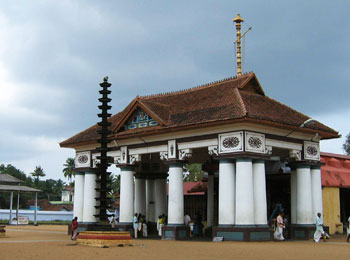 The temple is situated in the heart of Chengannur town. The town of Chengannur is considered one of the 32 Namboothri villages in Kerala. Mahadeva is understood to be the god of the village. The ruling deity is Mahadeva, in the form of Lingam is facing east, while the image of his consort, Bhagavathy is located exactly behind facing west. The temple is entered through a temple tower built in Kerala style and a golden flagstaff, both of which are axial to the central shrine.

This temple has a uniqueness of its own, quiet different from other temples. This is because of the interesting belief and practice of this Temple. The monthly festival, TRIPUTHARATTU which is considered as a symbol of fertility, is associated with a menstruation ceremony that is observed at regular intervals in the temple. That is why this temple is also considered as Shakthi Peedam. 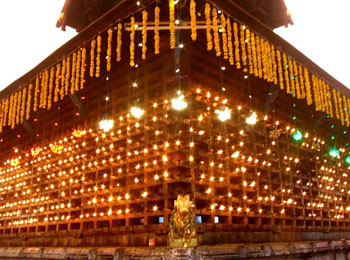 Lord Shiva and Parvathi Devi are the main investitures of this temple. The two main deities in this temple, Lord Shiva is facing East and Devi is facing West. The chief shrine is a conical copper plated one. Devi’s main Idol is made of Panchaloha - an alloy of five metals. The Shivalingam, is covered with a gold plate bearing an image of Ardhanareeswara - or the Shiva-Shakti manifestation of Shiva.

The other deities of the temple are Vigneshwara, Lord Ayyappan, Chandikeswaran, Neelagrivan, Ganga, and Naagar. There is also a shrine of SreeKrishna in this temple. 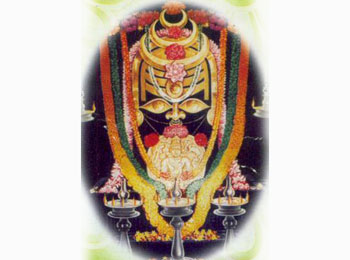 Based on the directions of Thazhaman Potty and other expert Brahmins the Thampuran proceeded to construct a temple there. The temple, except the kuthambalam, was built based on the plan given by Perunthachan, a famous and respected carpenter, The kuthambalam (performance hall) could not be constructed by any of them. Later on the entire kuthambalam was built under the direction of Perunthachan. The structure of the Kuthambalam originally constructed by Perunthachan was in such a way that the shadow of the performer would not fall on the stage if all the lamps were lit on each of the post of the performance hall (kuthambalam).

Once the construction was over the Thampuran requested Perunthachan to create an idol of Devi. Perunthachan pointed out a spot and asked the workers to dig that. On digging an idol of Parvathi Devi was discovered. This idol was installed at the earliest auspicious time.

After some years Perunthachan revisited the place and informed Thazhaman Potty that the temple would be destroyed in fire in due course along with the devi idol. He also gave an idol to replace the the onw that wa going to be destroyed. This idol was made of an alloy of five metals ( Panchaloham ) and asked him to keep a record of what he said. The Potty did accordingly. After some years the incident happned as predicted by Perunthachan.

The temple was renovated after the fire. The Devi's Idol was taken from the river with the help of some fishermen (Arayas) of Karunagappalli. This has been recorded in the works of Thazhaman Potty. Elated, the thampuran gave fruits and tender coconuts to the arayas who helped in recovering the idol. As this incident happened on the day of Shivarathri, even now this day is celebrated with the same tradition.

Tiruchenkunroor is one of the five ancient shrines in the region of Chengannur, connected with Mahabharat. Chenkunrur has been described as a town where the smoke emanating from the vedic ritual yagnas fills the sky and as a place surrounded by rich lush vegetation. (of bananas and coconuts) by Nammalwar, the great Vaishnavite. According to one of the legends, Yuddhishtra offered prayers to Lord Vishnu, seeking pardon for his act on the battlefield, where he uttered the words `Ashwattaama hatah kunjaraha` in an attempt to mislead Drona Acharya, and thereby leading him into a defenceless state. where Dristhadyuma brought Drona`s life to an end.

Shivrathri is another important festival of this temple being an important day for all devotees of lord Shiva. A large gathering assembles here during this day. Arayas (fishermen) from Alappattu in Karunagappalli, come here on this day and performs poojas and vazhipads. This custom is practiced since connection with the renovation of the temple.

This holy event is occurs on every 1st day of month of Thulam (month in Malayalam Era). On this day 36 paras (measurement in Malayalam) of Ghee is poured on the ‘Shivalingam’. This tradition was dates back to the day of finding of the shivalingam. The ghee is collected from devotees.

Chitra Pournami is another important festival at this temple. This is an important day for the devotees of Devi. Special poojas are conducted on this day.

Thriputharattu is a prominent and exciting festival which is unique to this temple. This festival is connected with a menstruation ceremony, which is observed periodically. The indication is observed on the vesture (UDAYADA) of Devi. This vesture is removed by the Main Priest (Melsanthi) every morning and examined. If he feels any signs of Thriputhu (Period) he hands over the vesture to Devasom Officials. This should be got Confirmed by the senior women, known as abbess of the Thazhaman and Vanghipuzha Maddam. If it is confirmed by the abbess, Devi's shrine will be closed and the utsava murthi will be worshipped in a different shrine of the temple.

On the forth day of the festival the Devi's Idol is taken to the nearby river to conduct the Arrattu, known as Thriputharattu. After this event happens, Devi is taken back to the temple on an elephant. Once the procession reaches Nalambalam, (In front of the main Entrance), devi will be received by Lord Shiva, who will be waiting there on an elephant. They together will go around the temple thrice (PRADAKSHINAM). After that Lord Shiva will enter the shrine through Eastern side and Devi will entire the shrine through Western side.

The Nearest Airport is Trivandrum International Airport, about 119 km.

The Nearest Railway Stations are at Chengannur, about a km; Thiruvalla, about 10 km and Changanassery, about 18 km.

It is 117kms north of state capital Thiruvananthapuram on the Main Central Road (MC Road). Chengannur Mahadeva Temple is only 1 km away from both Railway Station and KSRTC Bus Stand.