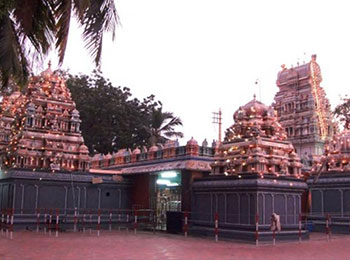 Godavaritir or Sarvashail Shakthi Peeth is located at Kotilingeshwar temple on the banks of River Godavari, near Rajamundry, Andhra Pradesh,India.The Godavari River is very sacred to Hindus and has several pilgrimage spots on its banks. It’s been a special place for pilgrimage for many thousands of years. Many famous personalities, including Baladeva (5000 years ago) and more recently Chaitanya Mahaprabhu (500 years ago) have bathed in river Godavari waters as an act of worship. The holy place is dedicated to a divine power “Goddess Durga” worshipped by a large number of devotees as “Vishweshwari”. Millions of devotees from all over the country visit the prehistoric divine temple every year. 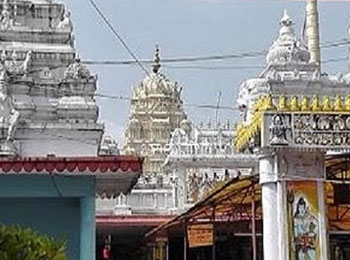 Godavaritir or Sarvashail Shakthi Peeth is an ancient temple. The temple’s architecture is magnificent. The temple is massive and the temple’s gopuram or tower is very tall.. The gopuram has several images of gods and goddess carved on it. River Godavari is one of the sacred rivers. Bathing in the River Godavari is said to wash away the sins of the devotees. Rajamundry is considered as Dakshina Kashi. Balasaheb (about 5000 years ago) and Chaitanya Mahaprabhu have bathed in the River of Godavari. River Godavari (1465 kms) is the second longest river next only to the River Ganga.

Godavaritir or Sarvashail is the Shakti Peetha where it is said that the Left Cheek of Maa Sati fell and the idols worshiped at this religious place are Vishweshwari (Vishweshi) or Rakini or Viswamatuka (The mother of the whole world) and Lord Shiva as Vatsnabh or Dandapani (one who holds a staff).

According to the history, Daksha who is the father of Goddess Sati insulted the Lord Shiva and Devi Sati. He did not invite them to Daksha Yaga. Goddess Sati did not get the permission from Lord Shiva and went to the Daksha Yaga. Her father insulted both Devi Sati and Lord Shiva. Hurt and humiliated, goddess Sati sacrificed herself in the Yagna. On hearing this, lord Shiva got angry and he started to dance furiously to destroy the universe. To prevent this, Lord Vishnu Sliced the body of Devi Sati with his SudarshanaChakra. It was placed in 52 different parts of the world. That is known as 52 Shakti peethas. In this temple Goddess Sati’s left cheek was placed and worshiped as Vishweshwari.

There is one epic reference to Sage Gautama who lived on the Brahmagiri hills at Trayambakeshwar with his wife Ahalya. Sage Gautama, once tried to chase away a cow which ate all the stock of rice in his granary. As the sage was chasing the cow with Durbha grass, the cow fell dead. The sage meditated upon Lord Shiva and wanted to rid himself of the Gohatya. (act of killing the cow). He requested Lord Shiva to bring the Ganges to purify his hermitage. Lord Shiva was pleased with the worship of Sage Gautama and appeared as Triambaka and brought down River Ganges to Trayambakeshwar. The river is also known as Gautami, as it was brought down by Sage Gautama. The river got the name of Godavari, as the river was brought down to absolve Sage Gautama from the sins of “Gohatya”.

Navaratri, festival of 9 days, that falls two times in a year- one in the month of March or April and other in the September or October month depending on the Hindu calendar, is the major festival here. Another festival that is celebrated with great enthusiasm is ‘Shivaratri’. Special poojas and yagnas are held during Durga Ashtami. Fruits and anna bogh are offered to the deity.

River Godavari is considered the Dakshin (Southern) Ganges and Rajahmundry Dhakshin Kasi. Every twelve years once, Pushkaram fair is held on the banks of the river Godavari. Millions of people from all over the country take a dip in the river for cleansing their sins. The atmosphere of the temple during this festival is blissful and beautiful as people all over the country come here to celebrate this auspicious occasion.

People pray to the Goddess for fulfilment of their wishes and to gain prosperity.

The Nearest Airport is Rajamundry Airport .