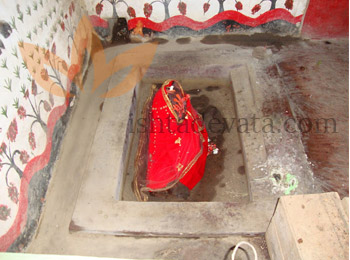 The Jayantia Shakthi Peeth is situated in Alajore in Bangladesh. The temple is located at the foot hills of Khasia hills in Sylhet district. The temple is located in north eastern Bangladesh bordering Assam. Road transport is the most common means of transport available to reach the temple. Indians need visa permit to visit the temple. Dhaka is the nearest airport. The Shakthi Peeth is sanctified with the flowing of the river Jayanti. Mahakala temple, dedicated to Lord Shiva is another interesting place to visit. 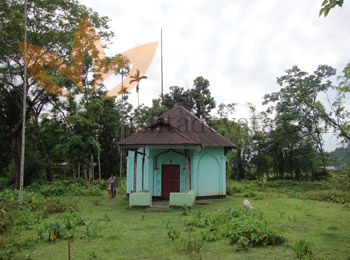 This is the place where the left thigh of Devi Sati fell. Here Devi Sati is worshipped as Jayanti and Lord Shiva as Kramadishwar. Jayantia Shakth Peeth is locally known as Falizur Kalibari. The art and architecture of the temple is simple, but splendid. The temple is engraved in a hill and is surrounded by mountains, forests and rivers. The temple dome is covered with gold plated sheet. The temple has a large courtyard. There are three caves around the temple. The first cave has the idols of the holy Trinity- Lord Brahma, Vishnu and Ishwar. The second cave has the idol of Lord Shiva and the third cave has the idol of goddess Mahakali.

The Main Deity is Devi sati is worshiped as Jayanti.

Bangladesh can be reached by air from any part of the world. You can take a direct flight into Dhaka, the capital city, from 27 major cities in the world. Besides the national carrier, several international airlines also fly in and out of the country. The national airport is at Dhaka, 20km from the city. One can rent a car, take a cab or bus to get to the city.

There are no direct trains that can get you to Bangladesh from any neighbouring country. However, the border is accessible from West Bengal and Assam (India) by train and then cycle rickshaws and buses provide the cross border connections. These are the only two entry points on the India-Bangladesh border open at the moment.

The roads are, however, best avoided during the monsoons (rainy season). The entry from Myanmar is no longer open. The main seaport is Chittagong. Ferries from Myanmar and India connect to the southern coastal ports of Bangladesh.