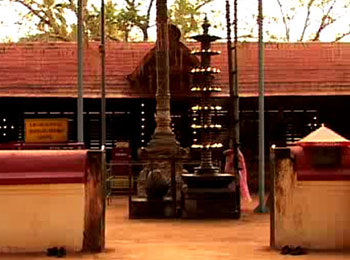 Lokanarkavu Temple is situated in Memunda which is 4 km from Vatakara, in Kozhikode District of Kerala, India. Located in the Malabar region of Kerala , the temple is one of the oldest Hindu temples of the State. The name Lokanarkavu is derived from Lokamalayarkavu which means lokam (world) made of mala (mountain), aaru (river) and kavu (grove). It is the ancestral temple of the 500 Aryan Nagarikas ,who had migrated to Kerala in the past.

Thacholi Othenanwas is a legendary martial art warrior who hails from the malabar region of Kerala. He lived during the 16th century AD. Udayana Kurup was his actual name. He started practicing Kalarippayattu from a very young age. Through vigorous practice and dedication to the art, he became a skilled Kalarippayattu warrior. History describes him as being a merciless opponent to enemies and a dear companion to the helpless. This is the only temple where a peculiar folk dance called Thacholikali is performed during festivals. This dance resembles the martial art Kalarippayattu. Even today Kalaripayattu artists seek the blessings of the deity before their debut performance because of the temple’s close association with legendary hero Thacholi Othenan.

The temple is devoted to goddess Durga who is the presiding deity. The temple has great historical significance since the legendary kalarippatathu hero Thacholi Othena of Kerala, worshipped Devi Durga here every day.

Lokanarkavu temple is located 4kilometers from Vatakara which is near Calicut or Kozhikode.The temple complex comprises of three smaller temples of godess Durga or Bhagavathi , Lord Shiva and Bhagvan Vishnu. The temple is frequently referred in the ballads of north kerala as the legendery hero Thacholi Othenan was a devotee of this godess. The Durga temple was built by Vaishya Brahmins who migrated to this place some 1500 years back.

Vaishya Brahmins are a particular clan of the Aryan race whose main occupation was trade and commerce. The descendents of these Arya Vaishya Brahamins of this temple still hold a significant place in the temple. They gradually began to accept some of the traditions of local Nairs and made martial relationships with them. Close examination their customs and beliefs shows significant differences from local Nair community. It is believed that the goddess travelled with them to Lokanarkavu in the form of a lady, who followed the five hundred Aryans. The successors still see this godess as their mother and not as goddess. Thacholi Othenan is often misquoted to have established the temple. He was a great devotee of Goddess Durga but he had nothing to do with the establishment and administration of the temple. Goddess Durga at Lokanarkavu is in her original form and not the fierce form of Maa Kali. The heroes of Vadakkan Pattukal had their ancestral godesses in the form of Ma Kali and not Durga form. The local rulers of the region too worshipped Maa Kali but later claimed Lokanarkavu temple as their ancestral temple and Durga Devi and their ishtadevata.

It was the local tradition of most rulers in Kerala to conduct Thamasa pooja or shakteya pooja; ie poojas with either Humana or animal sacrifice to please the Goddess. Later due to Aryanisation of temples, modifications were made to these rituals by replacing human sacrifice with cutting plantain. Poojas were performing offering tender coconut and cereals replacing liquor and meat. Unlike this local tradition, Lokanarkavu Devi temple doesn’t follow such brutal traditions and practices, as it was established by Aryans themselves. Even today, most Bhagavathi temples in kerala are Madhyama state.

This temple is said to be in Athyuthama state. The Aryans, strongly upheld their ethical roots through a complex of differences from rest of the people. The race was considered so superior that that they even efused to pay taxes to the local kings of Kerala, in the older times. But as time passed the Aryans became more tolerant towards thee local people and their practices. They slowly adjusted to the local custom and settled around the temple areas, withdrawing from all other matters of Local people. Among the mandala vilakku festival, the descendants these Aryan Vaishya Brahmins migrants, conduct the 16th vilakku, which is of prime importance. As a custom, devotees must first pray the stage that is near the main entrance of the temple, seeking their permission to worship the Goddess in the Sanctum Sanctorum. The stage has been built in memory of these Aryan Brahmin Ancestors. This is to show that the Lokanarkavu Durga holds these people with highest esteem and that she follows them everywhere. It is believed that the prayers made without praying these ancestors goes unheard.

Pooram is the most important festival of this temple and it is celebrated with great zeal. The week-long festival begins with Kodiyettam (flag hoisting ceremony) and concludes with Arattu.

The nearest airport is Calicut international airport which is 87 km away.

The Vatakara station is thee closest railway, which is 5 km from temple.