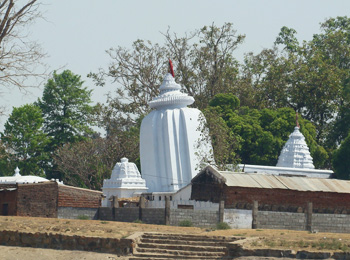 There is a village in the Sambalpur Subdivision, situated on the left bank of the Mahanadi, 23 kms south of Sambalpur. The village contains the Leaning temple dedicated to Lord Siva, which was built in the reign of Baliar Singh, the fifth Raja of Sambalpur. The worship of Siva is said to have been initiated by a milkman (Gauda), who daily crossed the Mahanadi to a place on the bank where the underlying rock croped out. Here he daily offered his dole of milk, which was at once drunk up by the rock, and this miraculous circumstance led to enquiries, which ended in the construction of the present temple. Huma is a place of pilgrimage, and is also visited by strangers out of curiosity to see the different kind of fish in the river. A great fair takes place at the foothill in March every year on the occasion of Sivratri. The presiding deity is Bimaleswar Siva. The special type of fish found here are called as 'Kudo' fish. They are said to be so tame that they will eat sweets and other foods from the hands of those who bathe close to the temple. During auspicious days they are called by their names and given the 'prasad' of the God. Here nobody tries to catch them as they are believed to be the assets of the God.