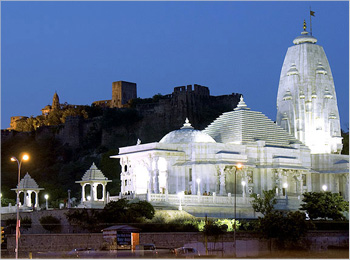 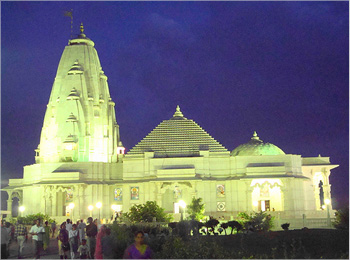 The temple is spread over 7.5 acres, adorned with many shrines dedicated to God Shiva, Krishna and Buddha. The Temple also houses a Geeta Bhawan for spiritual discourses. Located on Mandir Marg near Connaught Circus in Delhi,The Birla Mandir is one of the first temples by the Birlas across the country and till date, the funds to support this temple come from the Birla Family.

The three-storied temple is built in Nagara style of architecture. LakshmiNarayan Mandir is magnificent structure with a modern touch. The Temple interiors have beautiful carvings depicting scenes from the Indian puranas and ithihasa. A team of hundreds of skilled craftsman from Benares headed by Acharya Vishvanath Shastri carved the idols of the temple. The Temple idols were made of marbles brought from Jaipur, Kota stones from Makarana, Agra, Kota and Jaisalmer were used in the construction of the Temple premises.

The Temple walls are decorated with symbols and quotes from the Bhagavad Gita and the Upanishads. The Birla Mandir faces east and stands on an elevated platform with the highest tower soaring an altitude of 165 ft, while the lowest is of about 116 ft. The Birla Mandir also enshrines the holy Vedas. The Splendor this temple is complemented by an artificial landscape in the back, with mountains and cascading waterfalls. 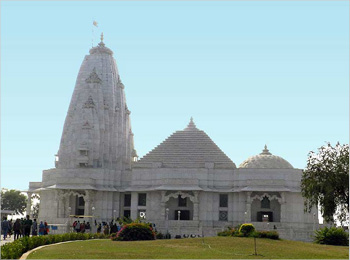 God Lakshminarayan is a manifestation or  avatar of God Vishnu. It is usually referring to God Vishnu who is also known as Narayan, when he is with his consort, Goddess Mahalakshmi in their abode, Vaikuntam. 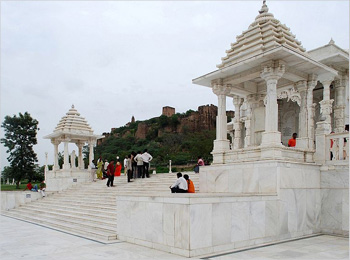 Accommodation Facilities at The Temple 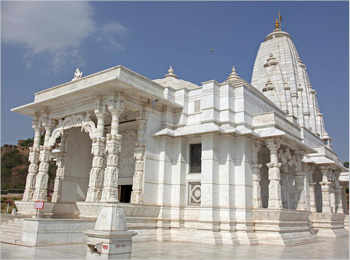 Keeping in mind the needs of the devotees,Birla Mandir provide best accommodation for out of town traveller with it’s guest house facility especially for international scholars pursuing knowledge in Sanskrit or in the Hindu religion. 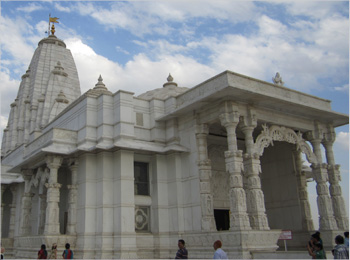 October to March is considered as the best time to visit this temple.In this temple, Gokulashtami (Janmashtami or Sri Krishna Jayanti) is celebrated with great fervor and It’s the perfect day to visit and witness the glamour of temple at its fullest scale.

As per temple rules camera and mobile phones are not allowed in the temple premises.

The Birla Mandir is famous for its celebration of Janmashtami. People in large number come to visit this temple of great spiritual legacy. The divine tranquillity of the temple is interrupted only by the melodious kirtans that echoes in the sanctum sanctorum. The temple enshrines almost all the deities of the Hindu pantheons.

The Lakshmi Narayan temple, also known as Birla Mandir was built by the great industrialist BD Birla .It was built in 1938 as a dedication to the Hindu deities Lakshmi (the Goddess of wealth and prosperity) and Narayana (the Preserver).

Apart from the main temple, the Birla temple also has several other sightseeing options that includes a majestic museum which displays the ancestral possessions of the Birla family, and a stunning garden with a shopping complex that consists various items to shop and buy which makes trip memorable for tourists.The Ganesh Mandir or Moti Dungri Temple, situated near to the Birla mandir is also another renowned and must visit temple of Jaipur.

The Birla Mandir with it’s quiet and tranquil atmosphere, compliments this spiritual site. The sanctuary's flawless structural designs and elegant carvings of temple speaks about the sophisticated architectural formation of a modern India. Located in the heart of the city, The Birla mandir is surrounded by a luxurious greenery, making the temple a noteworthy attraction, for tourists all over.

The closest airport is the Indira Gandhi International airport, located at 23kms Southwest of central Delhi.

New Delhi is well connected by road from all over India.