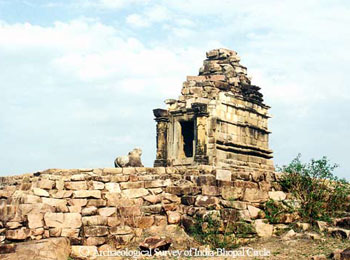 The Lalguan Mahadeva Temple is situated from the west of the Chausath yogini Temple and is built on the bank of an old lake, called Lalguan-sagar. It is dedicated to the lord Shiva and constructed of granite and sandstone.

It is a structure of modest size and design, roofed by a dilapidated pyramidal superstructure of receding tiers of pidhas. Its entrance-porch has completely disappeared and the doorway is plain but for a diamond carved on the door-still. This temple shares the plan and design with the Brahma temple and belongs to the transitional phase when sandstone was introduced but granite had not ceased to be used. It is slightly later than the Chausath-yogini and is datable to circa 900. It built on an outcrop of granite, stands on an eight feet high platform made of granite courses. The temple faces west. It shows a simple plan and design with a few ornaments and when structures were made partly of granite and partly of sandstone, it belongs to the transitional phase. This shrine is made largely of granite and sandstone. It is introduced for the veneer of the pyramidal roof and for those architectural members like pilasters and ceiling, which were required to be either carved or finely finished. The two outer ones are plain and square, while the four inner ones are similar in design to the pilasters of the porch in the sanctum rests on six pilasters. The surmounting ceiling consists of two plain intersecting squares capped by a course, which is decorated with a lotus flower in relief. The interior design of the sanctum is quite plain and shows no image, though the presence of Nandi facing the shrine indicates that the deity enshrined in the sanctum was probably a Shiva-linga.

Every Maha shivarathri Special Pooja will be held.