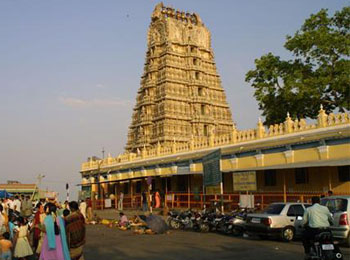 he Lakshmiramana Swamy temple in Mysore is one of the oldest temples in the city. In an inscription found at the Banni Mantapa in Mysore there is a mention of a grant for God Lakshminarayana in 1499 by the Vijayanagara King Narasa Nayaka, the father of the famous Vijayanagar emperor Krishnadevaraya. There is an inscription in the temple dated November 30, 1851, recording that Krishnaraja Wodeyar III renovated the tower built over the Mahaswara (the main entrance) Raja Wodeyar built the original tower.

The temple was the venue for the coronation of the five-year-old-child Krishnaraja Wodeyar III. As there was no other place that was suitable enough for the coronation, the British placed the child King on the throne of Mysore in this temple on June 30, 1799, after the death of Tippu Sultan. The temple is located on the western part of the fort inside the Palace near the Residential Museum.

There are two interesting incidents associated with this famous temple. According to legend, a chieftain of Karugahalli was defeated at the hands of Raja Wodeya and wanted revenge. Therefore he bribed the priest of the temple to offer the King poison mixed with holy water (thirtha), when he came to the temple to offer daily prayers. While doing so the priest's hands trembled. And on being questioned by the King the priest confessed that he had poisoned the holy water. Raja Wodeyar drank that water and it had no effect on him as a result of his faith in Lord Lakshminarayana.

The priest was transferred to a different temple and the Karugahalli chief was defeated, his fort destroyed and all his wealth was used as an offering to Goddess Chamundeshwari. Raja Wodeyar built the Mahadwara with a tall gopura and decorated it with golden finials, as an offering to the Lord for saving his life. In the second incident a half-blind Brahmin was cured of his blindness around 1599 at the interposition of Raja Wodeyar. To commemorate this miracle the Maharaja installed a two feet statue of himself standing with folded hands in the temple.