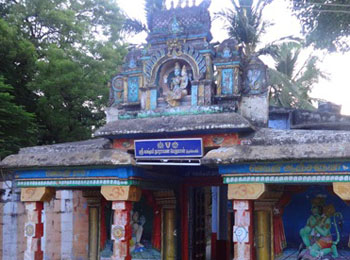 The main God here is Laxmi Narayana and the Goddess is Laxmi.

Vishnu grants a pleasant darshan to His devotees from the sanctum sanctorum with Mother MahaLaxmi on His lap. Vishnu is the deity for planet Budha (Mercury) and Mother for Shukra-Venus. Hence the temple is the remedial centre for those facing problems from these two planets. The place is known as Budha-Shukra planets remedial centre. Devotees pray to Vishnu with Tulsi garlands and those from Venus perform archanas to Mother with kumkum. They also worship Vishnu before sending children to schools praying for their education. Those who are facing problems in wedding proposals light ghee lamps on coconut shells placing it on rice spread on plantain leaves.

As the temple was dedicated to Lord Shiva, the Vilwa belonging to Him continues to be the sacred tree of the temple. Chakarathazhwar graces in the front mandabam with His 16 hands. Lord Yoga Narasimma with four hands holding the discus is behind him. Lord Shiva and Lord Brahma are on both sides. Lord Adisesha the divine serpent is above His head. This is a rare form of Lord Narasimma.

The Lord killed demon Hiranya at about sunset known as Pradosha time and is too furious. A drink made of dry ginger, jaggery, cardamom, water and lime juice is offered during the evening pujas. On the Swati star day devotees offer this to Lord Narasimma for the same purpose.

Sri Anjali Aanjaneya appears with a small Shiva lingam on his head. This image is not available in other temples.

This was a Shiva temple once. Some sages on their way to Mount Pothigai to meet Sage Agastya had a doubt about the unity of Lord Shiva and Lord Vishnu. They approached Lord Shiva to enlighten them. Lord Shiva in His Lingam form came out as Lord Vishnu with Mother MahaLaxmi. Lord Laxminarayana idol was made on the basis of this story and temple built then.

Vaiakasi annual abishek in May-June; Purattasi Saturdays in September-October and Vedanta Desikar urchavam are the festivals celebrated in the temple.

Ambasamudiram is 40 km far from Tirunelveli. The devotee has to get down at Agastheeswarar bus stop. The temple is very near this bus stop.