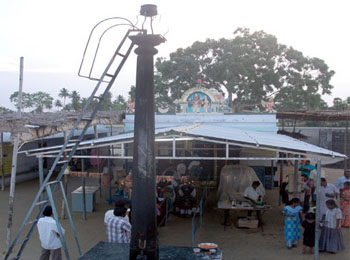 The Laxmi Narasimmar Temple is located in Mangarasuvalaipalayam and is dedicated to God Narasimma. The presiding deity is seen with His Conch and Discus under the Chandra vimanam in the sanctum sanctorum. It is considered that Chandra, the brother of MahaLaxmi, takes care of the God.

Lord Narasimma appears with His conch and discus in the sanctum sanctorum under Chandravimanam. The philosophy is that Chandra, brother of Sri Maha Laxmi is taking care of the Lord. In the sanctum sanctorum both Lord and Mother are in a standing form. There is Sri Chakra in the seat (peetam) of Lord Narasimma. There is a salagrama in the Arthamandaba which was originally worshipped as Sri Narasimma, called Aadhimurthy. Special poojas are performed to the Lord on New Moon, Full moon, Ekadasi (11th day either from New Moon day or Full moon day) days and on Thiruvonam star days. Lord Garuda (the eagle vehicle of Lord Vishnu) is opposite in a worshipping form. Lime and Thulsi are offered as Prasad, which devotees keep in their house for the welfare of the family.

In almost all Vaishnava temples, Lord Vishnu is found sitting on Adhisesha the serpent bed. In temples where the Lord is in a standing form, Adhisesha serves Him as an umbrella. In this temple, there is a shrine for Vinayaga in the Prakara with Adhisesha serving him as an umbrella. Hence, He is called Sarpa Vinayaga. As this a Vishnu temple, Lord Vinayaga is seen with Adhisesha. Those facing adverse effects of planets Rahu, Ketu and Mars and those worried on the welfare of children pray to Lord Vinayaga in this temple. Devotees perform Tirumanjanam with turmeric.

The temple is on the bank of a canal. Thalam means a canal and Karai-bank, hence the place is known as Thalakarai.

The object of Narasimma incarnation of Lord Vishnu was to destroy the Demon Hiranya. The demon had such a boon that he could not be killed by any power, any time, any weapon etc. Using the loopholes in his boon, Lord Vishnu took the Narasimma form (human body with a lion’s face) and destroyed him. The Lord was too furious then that nobody could go near Him. Mother MahaLaxmi sat on his lap and the Lord became calm and graceful. Based on this truth, in all Narasimma temples, Sri MahaLaxmi is seen sitting on the lap of the Lord. In this temple, Sri MahaLaxmi is in a separate shrine while Lord Narasimma is in another shrine. This is a very rare form in a Narasimma temple.

Ugra Narasimma has the demon Hiranyakashipu lying on his lap sitting facing east. Out of his sixteen hands six are inside Hiranyakashipu’s abdomen, two arms holding the intestines of the demon king like a garland and the other eight hands holding divine weapons including the Sudarsana chakra (disc) and conch. At his feet are Hiranyakashipu’s wife Kayadu, Prahalada, King Kasi Pandiyan and Narada Maharishi. On the either side of the Lord’s head, there are carvings of hand-fans. His tongue is protruding out with left leg folded and right leg over another slain demon.

Special pujas on Swathi Star days. Narasimma Jayanthi and all Saturdays in Purattasi month (September-October) are the festivals observed in the temple.

The devotee should reach Avinashi 40 kms from Coimbatore and proceed to Chevur 7 kms far from there. One has to travel further 4 kms from there and reach Dandukaranpalayam. The temple is three kilometers far from this place. It is advised to take a cab from Chevur.