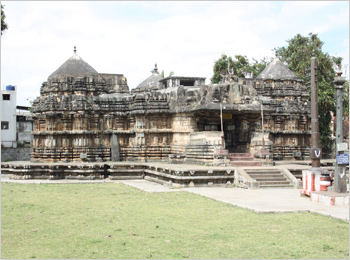 Lakshmi Narasimha Temple, dedicated to an incarnation of the Hindu god Vishnu, was built by the Hoysalas in the early 13th century. It is located in Bhadravati, an industrial town and taluk in the Shimoga District of Karnataka state, India. It is situated at a distance of about 255 km from the state capital Bangalore and at about 20 km from the district headquarters Shimoga. The art historian Adam Hardy categorizes the architectural style as a triple shrine (vimana) construction with two "exceptional" stellate forms, one for the shrine facing west and one for the shrines facing north and south, the basic building material being Soap stone. The temple stands on a jagati and the outer wall exhibits a two tier decorative plan. The monument is protected by the Karnataka state division of Archaeological Survey of India. Bhadravati is an industrial town in Shimoga, Karnataka. 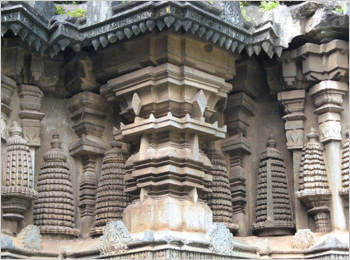 According to art historian Gerard Foekema, being a triple vimana (cella or shrine) construction it qualifies as a trikuta, which less commonly exhibits a tower one each of the three shrines. The temple is built on a jagati (a platform that is about a meter high) which serves the purpose of pradakshinapatha (circumambulation) as the shrine has no such arrangement in Hoysala temples.The entrance to the temple is through an open pillared hall or porch (mukhamantapa) followed by a closed hall (mantapa or navaranga).The porch consists of an awning supported by lathe turned half pillars and parapets on either side.The inner wall of the shrine is square and plain where as the outer wall is stellate (star shaped) with numerous recesses and projections that are used for decorative relief. The closed central hall which has no windows connects to the three sanctum via a vestibule (called sukhanasi). The vestibule also as a tower (also called sukhanasi) looks like a low protrusion of the main tower over the shrine. The outer wall of the vestibule is decorative but inconspicuous because it appears like a short continuation of the shrine outer wall. The ceiling of the closed hall is supported by lathe turned pillars.

With regards to outer wall decoration, what Hardy calls "two tier", Foekema designates as the "old style" with two sets of eves: one eaves runs around the temple where the superstructure meets the outer wall of the shrines, below which are miniature decorative towers on pilasters (called aedicula). Below this is a second eves followed by a panel of Hindu deities in relief and finally a set of moldings at the base. The design of the tower, according to art historian Percy Brown, is a characteristic feature to the Hoysala art. According to Brown, the stellate form of the base of the shrine with its projections and recesses is carried through the tower giving it a "fluted effect". The tower is divided into tiers with each tier diminishing in height and culminating in an umbrella like structure.[8] Brown also claims the lathe turned pillars with four brackets above are a signature style of the 11th-13th century Chalukya-Hoysala architectural idiom 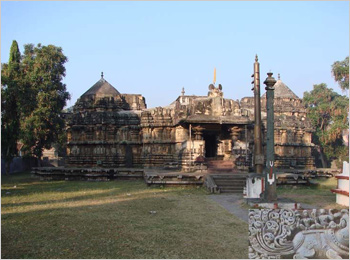 The presiding deity of this temple is Lord Narasimha, the incarnation of Lord Vishnu. The temple has idols (murthis) of Lord Sri Krishna, Lord Purushottama, Lord Ganesha and Goddess Sharadamba along with the deity the Lord Narasimha. 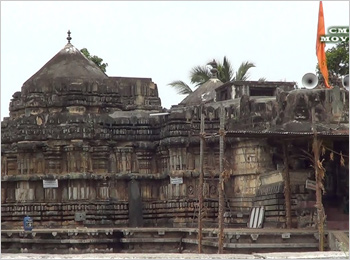 Lakshmi Narasimha Temple of Bhadravathi is the bearer of the rich culture and traditions that existed at this ancient town. There is a popular myth related to the formation of the small town of Bhadravathi. It is believed that here, Lord Vishnu in the avatar of Varaha, that is, wild boar, rescued Bhudevi, that is, Goddess Earth. She was held captive under the sea by demon Hirayankasha. As per Holy Scriptures, when Varaha lifted earth with his two tusks, River Tunga and Bhadra were formed. The place was previously known as Benkipura. The temple is dedicated to Lord Narasimha, an incarnation of Lord Vishnu. The temple consists of other images of Hindu gods, namely, Sri Krishna, Lord Purushottama, Lord Ganesha and Goddess Sharadamba. The Lakshmi Narasimha Temple of Bhadravathi is an 800 years old temple. The sculptures of the temple also exhibit the daily lifestyle of the 13th century, along with the images of musicians and dancers. The temple was constructed by Sir M Vishweshwaraiah, the grandson of an eminent Hoysala monarch, Vishnuvardhana.

Besides the regular rituals, there are annual festivals celebrated here. During Dussera, the iconic deity of Lord Narasimha is taken round the city in a grand procession. This festival takes place at the Hindu month of Ashvin, which is anytime between September and October. Navaratri Festival: This festival is celebrated with great pomp and glamour at the temple complex. This festival generally takes place couple of times in a year, once between March and April and another time between September and October. Vaikunta Ekadesi is the 11th day of the waxing moon in the Hindu month of Magh and an auspicious day for the Vaishnavaite cult. Worship attains a different dimension here, on this day. This festival generally takes place anytime between December and January.

The temple is still functional and hence is visited by numerous devotees throughout the year. There is an important guideline even for the priests to worship at this temple; only celibates are permitted to perform worship at the Lakshmi Narasimha Temple of Bhadravathi.

Some of the sculptures of the Lakshmi Narasimha Temple of Bhadravathi are worshipped till date. Devotees apply vermilion, turmeric, pour oil and burn camphor for worship.

There are different types of prayers that can be performed to pay tribute to Lord Narasimha here, like the Narasimha Pranama, Narasimha Mahamantra and Dasavatara Stotra. Sometimes on the special requests of the devotees, the priests may also perform Divya Prabandham prayer. After the completion of worship, the priest sits at the raised platform of the temple, reading Holy Scriptures.

While the climate remains cool all through the year, the best months to visit are between the months of October and March.

Bhadravati is well connected by rail, road and air. It is located 255 km away from Bangalore, 19 km from Shimoga and 170 km from Hubli. From Bangalore: All KSRTC buses that start from Bangalore to Shimoga stop here at Bhadravati. The journey will be around six hours. From Shimoga: To reach Bhadravati from here, one can either book a taxi or take a KSRTC bus. The journey may not be that comfortable but will be economical.

The railway line from Birur-Bangalore passes through this city. Apart from this many trains from Bangalore to Shimoga also stop at Bhadravati. Another option would be to catch a train to Birur and switching over to a bus/ train heading to Bhadravati.

The nearest airport to Bhadravati is Hubli, located at a distance of around 170 km. There are daily flights to Hubli from Bangalore and Belgaum. There is also an option of using the Mangalore airport which is 180km away. Once we reach Bhadravati, we can take any mode of transport to reach the temple premises. If we are travelling by car, the locals can help and show the way to the temple.

The temple opens early in the morning at 6.00 am to the visitors. The temple is closed at the afternoon. The temple again opens at 6.30 pm at evening and closes at 9 pm.