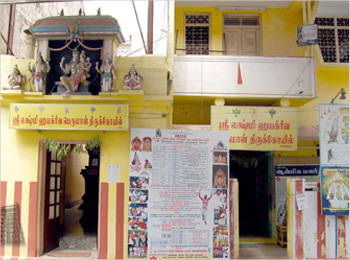 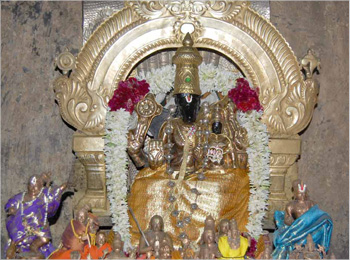 Baghwan Vishnu, at the time of Pralaya the end of the world then, kept all the beings in his belly, slept on the banyan leaf bed in the ocean. Later, for the re-creation of the world, he created Brahmma from His Naval Cord and taught him the four Vedas. Brahmma began the creation. Two water drops appeared on the naval leaf of Lord changed into two demons. As they were thus born to Lord Vishnu, they summed up the courage to snatch the creation profession from Brahmma, stole the Vedas from Him and hid them in the deep underground- Pathala Loka. Brahmma surrendered to the Lord. Lord Hayagriva is worshipped as Lord of Wisdom as He recovered the Vedas from the demons. Where there is wisdom, wealth joins there. The Lakshmi Hayagriva form combines wisdom and prosperity.

The following is a sloka recited by students both in morning and evening in the temple. They recite the sloka in their houses too.
"Gnananandamayam Devam Nirmala Spatikakrutham
Aadhaaram Sarva Vidyanam Hayagrivam Upasmahe"

Lord and mother are embracing each other with their left and right hand respectively. Generally idols are made showing Mother alone embracing Lord Hayagriva. As this idol shows both embracing each other, it is believed that worshipping the Lord and Mother in this form ensures stronger marital affinity among couples. Special pujas are performed for those dull in education and those suffering from stammering.

The nearest airport is at Chennai. The nearest railway station is at Puducherry. Puducherry is well connected by road. The temple is in the heart of Puducherry in Muthialpettai.