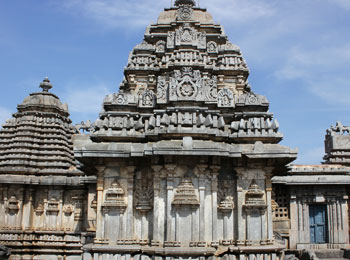 The Lakshmi Devi temple is located in Doddagaddavalli, a village in Hassan District of Karnataka state, India. It is located 16 km from the district capital Hassan and lies on the Hassan city - Belur highway. The temple was built by the Hoysala Empire King Vishnuvardhana in 1114 C.E.

The Lakshmi Devi Temple is one of the famous temple which is bulit based on the Hoysala style. The building material is Chloritic schist, more commonly known as soapstone that does not stand on the jagati platform. By a merchant called Kullahana Rahuta and his wife Sahaja Devi, the temple was commissioned. The temple is a unique chatuskuta construction (four shrines and towers) which is bulit inside having a 7 feet tall. With nine "bays", three of the vimanas (shrines) have a common square mantapa (hall). Via an oblong extension consisting of two "bays", the fourth vimana is connected to the mantapa. Into the temple, the extension has two lateral entrances. All the vimanas have their original tower (superstructure) intact. The towers are in Kadamba nagara style. Over the shrine, the sukanasi is a tier lower than the main tower. All the four sukanasi are intact and so are the kalasha (decorative water pot like structure) on top of the main towers. The style of the tower is based on the Kadamba nagara. Each vimana has a vestibule connecting it to the central mantapa. On top of the vestibule is its own tower called sukanasi. The mantapa is open and in square shape. On all four sides of the mandapa, the reason for the square plan is the presence of shrines with no side open for "staggering". The temple is having a separate fifth shrine of Bhairava, an avatar of the Hindu god Shiva. The shrine is complete with its own vimana and on top tower with a kalasa, a sukanasi with a Hoysala emblem on it. Another unusual feature of the temple is the existence of four more minor shrines at each corner of the temple complex with two sides of each shrine attached to the courtyard wall. By eighteen lathe-turned pillars, the ceiling of the main hall is supported. There are two sculptures of large demonic living corpses called betala inside the main hall. On either side, the main shrine facing east has a 3-foot-tall (0.91 m) image of the goddess Lakshmi with an attendant. In the upper right hand, the image holds a conch, a chakra in the upper left, a rosary in the lower right and a mace in the lower left. In the shrines facing north, south and west respectively are the images of Kali (a form of Durga), the god Vishnu, and Boothanatha Linga.

Inside the temple inner sanctum, one can see the following deities. The main shrine facing east has a 3 foot tall image of goddess Lakshmi with an attendant on either side. In her four hands, the image holds a conch in the upper right hand, a chakra (discus) in the upper left, a rosary in the lower right and a mace in the lower left. In the shrines facing north, west and south are the idols of Kali, Vishnu and Boothanatha Linga (the universal symbol of Shiva). A sculpture of Tandaveswara (dancing Shiva) exists in the circular panel at the centre of the ceiling of the mantapa. Other important sculptures are those of Gajalakshmi (form of Lakshmi), Tandaveswara and Yoganarasimha (form of Vishnu) found on the doorway of the temple.

According to the legends, this temple is said to have been built in 1114 A.D. by a merchant called Kullahana Rahuta, a merchant or high officer in the Hoysala court. And this was for his wife Sahaja Devi. It is one of the earliest known temples built in Hoysala style and is built with Chloritic schist or Soapstone.

It was a dark and cloudy monsoon day when I was here recently. The soapstone did not get a chance to gleam in the sunshine, but stood plainly in the dark and grey weather. But it was the surrounding lake and the greenery that caught my eye first. Then, came the series of long granite steps along the outer wall of the temple compound. It is these steps that separate the temple compound from the lake. One can get to see the high vimanas of the temple from this place.

The entire temple area comes under the purview of the Archaeological Society of India who have maintained it very well. In terms of current functioning, prayers are still being offered daily to the temple deity, though the temple is open only during designated time slots. But, in case, you are interested in exploring this temple and are unable to make it during the allotted time slot, then you can reach out to the temple priest who stays in the house that is just opposite the main entrance of the temple. Generally, the temple priest is very kind and often offers to open the temple doors for tourists and devotees alike.