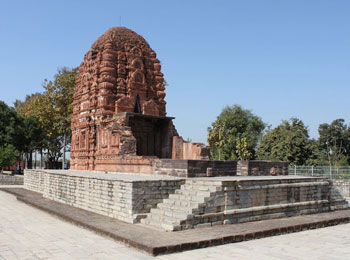 Sirpur is a village located in the Mahasamund district of Chhattisgarh, which is at a distance of 90 km from the state capital Raipur. The village houses a popular shrine dedicated to Lakshmana. Sirpur was once known as Sripura, which served as an important centre during the rule of South Kosalas over Sarabhapuriyas and Panduvamsis from 6th to 8th century AD.

Sirpur is an archeologically important site which consists of various ancient Hindu and Buddhist temples and monasteries. Among these monuments, stands the most preserved temple of Lakshmana, facing the direction east. This temple is believed to have been built by Vasata Devi, the mother of King Mahasivagupta Balarjuna during the 7th century AD.

This temple is primarily dedicated to Lord Vishnu. Made of brick, the temple stands on a huge raised platform that is accessible by steps from the north and south directions. The original temple premise had a garbagriha, antarala and a mandapa. That was once upheld by strong pillars which is ruined now. The doorframes are beautifully cared with figures of Seshasayi Vishnu and his other incarnations. The Lakshmana temple is one of the finest temples built with bricks of India. The temple also serves as the backdrop of the famous Sirpur Music and Dance Festival that is conducted every year in the month of January.

How To Reach Sirpur

The airport located nearest to Sirpur is the Raipur airport. Domestic flights are available to many major cities of India from here. Sirpur can reached by rail or road from Raipur.

The nearest railway station is situated at Mahasamund, which is around 29Kms away from Sirpur.