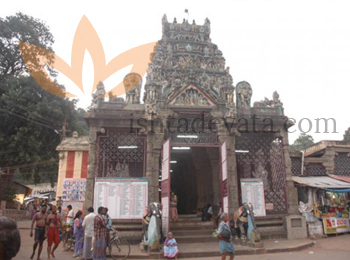 Thiru Kutralam is one of the 275 Thevara Shivasthalam that is dedicated Lord Shiva, and is situated in Tirunelveli, Tamil Nadu. In this temple, Lord Shiva is worshipped as a self-manifested Linga. This is one of the Pancha Sabha Kshetram of Lord Shiva known as Chithra Sabha temple. The marvelous Chithra Sabha positioned here is prominent for its stunning wall painting and carvings with a close resemblance to Chidambaram, one of the Pancha Sabha Keshtram. This temple situated in a serene atmosphere with the shape of a Conch and it occupies 3.5 acres of land at the foot hills of Trikoodamalai.This temple is administrated by The Hindu Religious & Charitable Endowments Department Tamilnadu and inspected area Thenkasi.This temple is located at about five kilometers, away from Tenkasi, Tirunelveli - district. Ad midst of Sylvan surroundings, with the adjoining background of main falls, this Courtralanathaswami temple is found in the Courtralam Township. As Courtralam - falls is popular among the people; Sri Courtralanathaswami Temple is famous for one of its Pancha-Sabha known as Chitra – Sabha. The jackfruit tree is the Sthala Vruksha. Saint Tirugnanasambander of 7th Century A.D. glorifies the Lord of Kutralam in 2 pathihams one of which relates to the Sthala Vruksha Other Saints Tirunavkarasar Manickavachagar Pattinathar etc., have poured forth their feelings of spiritual ecstasy in soul – stirring lyrics. At Kutralam be found a vaishnava temple which he transformed by his magic touch into a Siva one, God Vishnu changing into Sivalingam, the conch in his hand, expanding as the temple and the chakra rising as the siharam . The temple is therefore conch – shaped – a peculiarity unlike other temples that are either squares or rectangles.

This temple was constructed before 5th century BC. Its main entrance faces the east. There are two elephants is two handless in the front mandapam there is a thirikooda mandapam with 100 pillars. Secondly there is a reception mandapam, there are many wooden pillars that are engraved elegantly with artistic splendor. The sabha contains many inscriptions about Chola and Pandya Kings and is decorated with many local deities. Chithra Sabha is said to have been constructed using medicinal herbs as mortar. Heavy wooden carved planks serve as doors. Many small halls inside the temple include statues of Lord Vishnu, Kasi Viswanathar, Kasi Visalakshi, Tenkasi Viswanathar Swamy, Ulagammai Ambikai, Nellaiyappar Gandhimathi Ambal and Navagrahas. Other ancient temples associated with the religious heritage of Courtallam include the Kashivishwanathar Temple (Tenkasi), Kumaran Temple (Ilanji), Thirumalai Kumarasamy Temple (Tirumalaikoil), Shenbagadevi Temple (Shenbagadevi) Anjaneyar Temple (Krishnapuram) and Thoranamalai Temple. In the south of the mandapam lord vinayagar and in the north lord arulmigu Nayanar sannithi are found.Crossing the entrance , there is the namaskara mandapam, alter, stupa, and mandhi, then in the north , fourlegged sabapathi mandapam, After the kodi mandapam , there is a lord shrine temple, thirusutru entrance , mandapams front located lord vinayagar lord muruga stste and Dwarapalagas are found.

Goddess puyalvaimozhi amman is found to be the consort of thiru kutralanathar. Amman sannithi is found in the south of the lord thirukutralanathar’s sannithi. In its entrance’s front portion one can find the annampillai peedam. In the outer wall south of the amman – kailasanathar and in tha north is goddess durga is the northern front of the sannithi.

Significance of the Purana

Purana stories says that this place was a vaishnava temple and sage agasthiyar turned it into kuru kuru kutralanathar temple this led to a heavy headache to thirukutralanathar so he was done abhishegams by 64 herbals and shanthanathi oil palam. Prepared and applied to the lord.this is done even today by the devotiees. Revealing its vainava base the temple is in the form of a conch. Conch is favoured by perumal.

About eighty nine stone engravings here been found in kutralam the chola king parakesarivarman alias parandaghen I (period 927-943 bc) have ten , In the first stone engraving there is mention about ‘thiru kutrala perumal’ the later once depict ‘kutrala devan’ madevan, since serge evidence reveal a solar eclipse historians calculate the period clearly to night the temple3 deepam cows were donated along with gold money goats and buffaloes are also found to be denoted as per the stone engineering. Since there are mentions about primal are can relies that there were bath the shiba sannathi and perumal sannathi.

Evidence are found in devara songs during the pallava period about kutralam town and god. Religion for kuravaas have also sung about this temple thirugnana sambanthar has visited this temple and worshipped thirukutralanathar and sung about the stala tree in the second scripture’s 71st pathigam , the term coutralam is first used in Devaram. It is also found present in devaram ,thiruvasagam , thirukkovayar, sivaperuman thiruvanthathi, and periya puranam. During the Nayakkar rule sages like pattinathar, and arunagiri nathar, has sung about thirukutralanathar. Thirigoodarasappa kavirayar has sung 16 amall literary songs about kuzhaivaimozhi amman.

The temple is dedicated to Sri Thiru Courtrallanathar, Thirukootachalapathi and Kuzhalvoimozhi Amman (Devi whose voice is as sweet as the music of the flute). Lord Shiva is a Swayambumurthi in the temple.

When Parvathi’s marriage took place in the Himalayas, All three world come to be in a single line the south seemed to be higher than the north. Lord sent sage agasthiar equaling him to the status of devas to the trigooda hills. When sage agasthiar came this temple was a vairava temple. When he tried to entered the temple was a stopped by dwara palagas. so he worshipped Ilanji kumaran. He was granted a wish to get whatever he wanted. At this instance agasthiyar told Ilanji Kumaran the problem he faced while trying to enter the temple. So he grand him the boon to take the form of a Vairavate , took bath in the eascade and entered the temple successfully.

Every one considered him as a guru and showed due respect when enquired about his where about agasthiar replied that he came from tirupathi mularri kannan tirupathi and ordered that all pooja articles to be brought he removed the priest from the street he worshipped the stupa and the surrounding gods and lord thirumal. He took the vishwaroopa form and kept his hand on loard thirumal saying ‘kuru kuru kutralanathre!’ and turned him into thiru kutralanathar says the stala purana.

Three major festival of ten days each are celebrated in a year; Vishu festival (April) Aipasi Vishu festival (October) Arudra (Erato) Festival (Des – Jan). A special feature of this temple is that during Arudra festival, Thandava Deeparedhana representing the cosmic Dance of the Supreme Being is offered daily to God Nataraja both morning and evening in the temple and specially on the Arudra – day and During the other two festivals this offering and picturesque festival days.

Devotees perform abishek and archanas to Lord and Mother and offer vastras.

Those mentally retarded and suffering from skin troubles get all relief with a bath in the falls and prayer to Lord Kuttralanathar. Those suffering from intense headache use the Thaila Prasad (Oil Prasad) and rub it on their foreheads for cure.