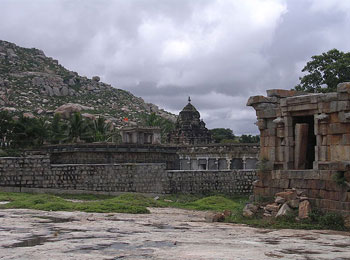 The deity of God Ganesh is worshipped at the holy Kurudumale Mahaganapathi Temple that is located in Kurudumale at Kolar district of Karnataka. This exceptionally beautiful temple was constructed by the Vijayanagar kings. As per a legend, the Devas came to earth from heaven with the purpose of fun. The devotees consider this temple very auspicious and prefer visiting this temple to gain the blessings of God Ganesha before inaugurating any new activity or work.

God Ganesha is known as ‘Vighnaharta’ which refers to the one who unblocks the hurdles. There is another temple nearby called the Someshwara temple which is dedicated to God Shiva. The architecture of Kurudmale Ganapathi temple is quiet unique as it constructed out of a single stone. The temple is located at a prime location, attracting a lot of devotees as it is only 10 kilometres away from a tourist spot known as Mulbagal. 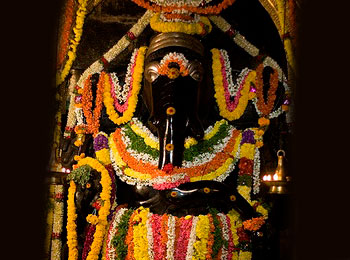 The temple was established during the era of the Cholas. The temple building depicts different kinds of architecture within the sites of temple as it was completed by renowned artists Dankanachari and Jakanachari. The idol of God Ganesha was enshrined in the temple when King Krishnadevaraya built this temple and millions of devotees have come over the century to ask for God’s blessings.

According to the mythology, God Ganesha’ deity was enshrined in this temple by God Brahma, God Vishnu and God Mahesh who are also known to be the maker, destroyer and sustainer of the world. The idol of God Ganesha is about thirteen and a half feet in height and is a major tourist attraction. This temple is known to be a holy place as Gods came from heaven for reformation.

The devotees feel blessed while worshipping in this temple due to the positive vibes all over the temple. It is also believed that the Gods shower blessings of good health and prosperity on those who worship with pure heart. The priests of the temple conduct a huge pooja for God Ganesha by the trimurthis.

It is recommended for the devotees to visit the temple anytime between the months of July and October.

The devotees can arrive at the nearest airports of Hubli or Bangalore.