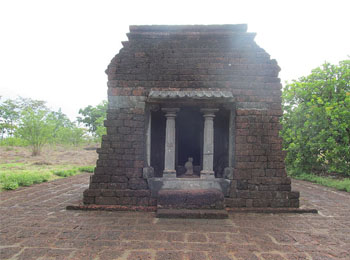 The deity of God Shiva is worshipped at the holy Mahadeva Temple which is located at Kurdi in South Goa. This temple was constructed over the years but was moved to Kurdi after the construction of Salaulim Dam as the whole village drowned in water.

This temple was initially constructed on the banks of River Salaulim, almost 17kms away from its present location. It was moved because the whole village was threatened due to the construction of the dam. The temple was dismantled and rebuilt to create the same topographical setting for the temple. The temple’s building was dismantled and its various objects were taken to the new place to construct it layer by layer and it took about 11 years. The temple now comprises of a Garbhagriha and a porch which is constructed with basalt and laterite stone. The temple enshrines a Shivalinga and thousands of devotees visit over the year. A museum is also built in the temple to display the various changes that took place over the years in respect to the temple.

The temple’s structure contains a Garbhagriha decorated with a three Dwara Sakha carved with portrait of God Ganesha at Lalatabimba. There are idols of a couple of female devotees installed on the sides of door jambs while the Chanrashila with Sankavartha and a Kirthimukhas on the threshold adorn the Garbhagriha.

The airport of Dabolim is nearest to the temple which is 29kms away from Panjim, the state’s capital. This airport is well connected to the major cities of India.