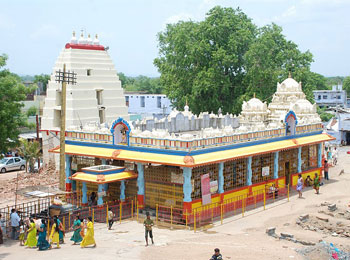 The Sri Veera Bhadra Swamy Devastanam temple is located in the Kuravi village ,Warangal District in Andhra Pradesh. Kurvi (Korvi) is located at a distance of 70km from warangal and is 11 Km from Mahabubabad town. 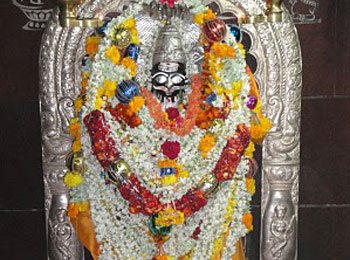 The temple was built by Bheema Raju in 900A.D. who belonged to the Vengi Chalukyan Dynasty. Betharaju took up the work of renovating the temple complex after the governance passed into his hands. A large number of the devotees visiting the temple are the tribal community making the temple an important market for tribal jewellery especially during the temple festivals. 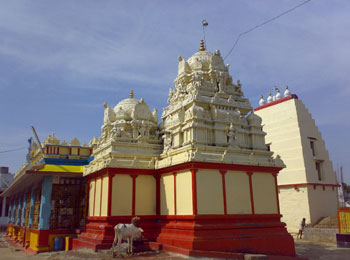 The presiding deities are Lord Shiva and his consort Shri Bhadrakali in the Veerbhadra Swamy temple which is also known as Koriveeranna. King Daksha's daughter - Sati (Shiva's wife) came to know that her father had organized a great Yajna. However, to her great disappointment she came to know that she and her husband were intentionally excluded from the guest list. She immolated herself in anger, in hearing so Lord Shiva thrashes his hair on the ground where from a massive volcano erupted symbolising Veerabhadra as Shiva's anger. The idol has an angry face, several hands and three eyes. He holds multiple weapons in his hands to avenge the death of Sati.

The greatest festival in the temple is Mahasivratri Brahmothsavam festival which celebrates the wedding of the lord Shiva with the Goddess Sati. The 16 days long festival is a treat to the locals while devotees swarm in huge crowds on this occassion. The devotees observe jagran and seek blessings. Other festivals include Ugadi (Telangana New Year), Vinayaka Chavithi , Sankranthi Uthsavalu , Sri Ramanavami Celebrations , Kartheeka Masothsavams , Dussera Celebrations (Nava Ratri) , and Deepavali.

The Vijaywada airport (150 Km) and the Rajiv Gandhi International Airport, Hyderabad (200Km) are the nearest airports.

Mahabubabad also known as Manukota is the largest town in Warangal district, telangana and is easily accessible from the town through a range of transport that is available to reach the temple. Kuravi, Korvi is around 70 Km from Warangal.