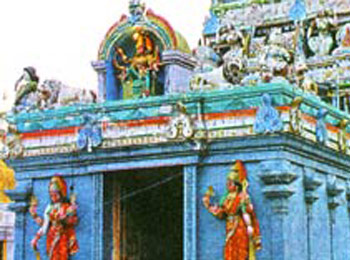 Sri Kungumavalli samedha Thanthondreeswarar temple is a God Shiva temple located in Uraiyur, in the district of Tiruchchirappalli, Tamil Nadu, India. The main divinity Thanthondreeswarar (God Shiva) accompanied by Kungumavalli. The sacred tree is Vilwa. Brahmma theertham is considered the sacred water. The agamam or pooja of the temple is Kameeyam. The age of the temple dates back to 500 to 1000 years. The temple is open to visitors only during the morning and evening hours, but during festival days, it is opened for long hours. This temple has more followers in the state.It was designed according to the Dravidian style of architecture. The temple has a wonderful artistic and craftsmanship in its structure.Here, the Ambal is Sri Kungumavalli (valaikappu Amman). Staying aware of the history and in recognition of Gandhimathi, Valaikappu festival is done to ambal amid Thai masam. Lakhs of bangles embellish as Festoon around ambal. She is likewise beautified with ponkappu, vepillaikappu and vellikappu. The bangles from the Ammam are given as prasadam to enthusiasts looking for a kid and pregnant ladies to guarantee a sound conveyance. 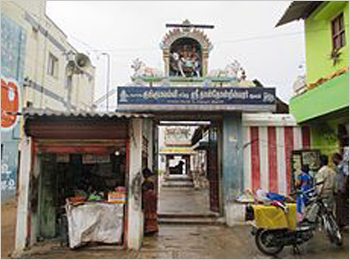 It is one of the sought after temple in this district and in the state.The Temple reflects Dravidian architectural temple styles from each every angle. The artistic and craftsmanship work are real wonder to be witnessed of the visitors of this temple complex.

The chief deity of this temple is Thanthondreeswarar (Lord Shiva) and his consort is Kungumavalli. 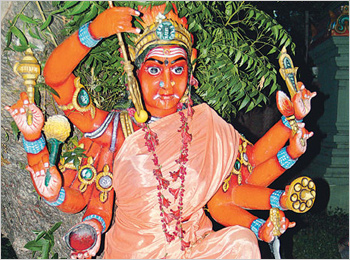 Longtime prior, Uraiyur was administered by Raja Sooravaditha Sozhan who wedded a Nagakanni named Gandhimathi in the wake of looking for consent from God Indra and Nagarja. Gandhimathi was a passionate follower of God Shiva. She would visit Thayumanaswamy in Tiruchirarmalai (Malaikottai) consistently. She will go to the sanctuary ordinary by stroll through Sage Saramamunivars Greenery enclosure and worship the God. Days went by and she got to be pregnant. Regardless she flew out by stroll to the sanctuary to beg. While she was nearing her delivery date and was not able to stroll because of exhaustion and warmth. She was distressed to the point that she would not have the capacity to see the God that day that she cried to herself. Thayumanaswamy offered an explanation to her petitions to God and offered darshan to her. He showed up before her as he was in tiruchirar malai. Consequently the name Thanthondreeswarar. He favoured her and advised her till her conveyance she can pray to him from there. Therefore, the shrine came into presence.

It is to be highly noted that a devotees who prays to this particular lord gets immediately blessed with job opportunities and children. A huge number of devotees and pilgrims pray to this particular lord for the removal of obstacle in marriage affairs , to obtain better education , happy and prosperous life etc. The shrine is usually open in the morning hours and evening hours. During the festivals and auspicious days, is opened for long hours.

It is connected to Chennai, Madurai, Thanjavur, Bangalore, Mysore, Tirupathi, Rameshwaram and Kochi.

Trichy has an international airport, which receives flights from Colombo, Kuwait and Sharjah, as also from Indian cities like Chennai. Trichy is also a major junction on the meter and broad gauge lines of Southern Railway.

Linked very well with the rest of the state by road, there are buses between Trichy and all the major cities in south India.Getting Around Tiruchirapalli. The most common mode of transport you will find in Tiruchirapalli is auto rickshaws and buses. It gets easier for you to move around within the city.