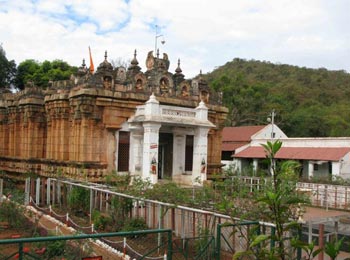 The Kumaraswami Temple is situated on south-west and is linked to the town of Sandur through road. The temple complex encompasses separate shines dedicated to Goddess Parvati and Lord Kumaraswami. The temple also houses a vigraha of Lord Ganesha, who is gaining popularity among the masses these days, even more than the main deity Kartikeya.

According to Legends, the Parvati temple was built by the Badami Chalukyas during the 7th to 8th century AD. This shrine has a vigraha of Goddess Parvati who is the main deity. This temple is a part of the Kumaraswamy temple (originally had Shanmukha as the main deity) which was built by the Rashtrakutas during the 8th-10th century AD. Both the parvathi temple as well as the Karthikeya temple stands as protected monuments of India under ASI. The temple was discovered later in the 15th century by the local rulers called the Ghorpades, from the dense forests of Swamimale hill.

Earlier, women were strictly prohibited from entering this hill shrine. Later in 1996, Murarirao Yeshwantrao Ghorpade lifted the ban on women. It is estimated that nearly 3,000 women have worshipped the deities at this temple, once the ban got lifted. The local rulers Ghorpades were much loved and respected by the natives. They had in fact declared the temple open to Harijans as early as the 1930s. On learning of this news upon his visit to Sandur in the year 1934, Mahatma Gandhi in one of his speeches had proudly mentioned that "A small state in south India has opened the temple to the Harijans, the heavens have not fallen”

The Pampa Sarovar, Annual Fairs (JAATRAS) in Sandur is celebrated every year. Annual fairs are held in Kumarswami temple during the month of November every year.

How to Reach Karnataka

The Bellary railway station is the nearest. Karnataka is also well connected to other parts of the country through a wide rail network.

Karnataka State Road Transport Corporation (KSRTC), connects the state with other major cities and towns. In addition to this, the NEKRTC and NWKRTC make commuting easier by linking even the remotest areas through proper road network.