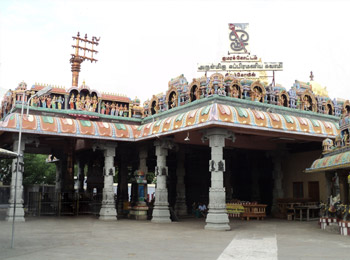 
The temple is located in Kanchipuram. It is among India's seven "moksha-puris" or sacred cities. It is just half a kilometre to the northwest of the bus stand, on the west Raja Street at the north end of which is the Sankara Matham and at the south end is the Kachapeswarar Temple.


Soma Skandha’’ posture indicates Lord Shiva seated with the Goddess Shakthi to his left, with his son, Lord Subramanya seated between them. Valli, Deivayani are absent here, but their festival idols are kept hereThe location of the Kumara Kottam Temple between Sri Ekambereswarar Temple and Sri Kamakshi Amman Temple reminds devotees of the Somaskanda form in which Muruga sits in between Parvati and Parameswara.


The temple has a separate shrine for Lord Vishnu called as Urugum Ulla Perumal. There is a legend associated to this shrine. When there was a disastrous flood all over the world, the sage Markendeya swam through and reached Kanchipuram. The city was not affected by the flood. Lord Vishnu followed the sage and he too reached Kanchipuram. He bathed in the holy waters of Ulakaana and worshipped Lord Subramanya of Kumara Kottam temple. As per his request, Lord Subramanya made him to be present next to his shrine in the same temple.


"Soma Skandha"" posture indicates Lord Shiva seated with the Goddess Shakthi to his left, with his son, Lord Subramanya seated between them. Valli, Deivayani are absent here, but their festival idols are kept hereThe location of the Kumara Kottam Temple between Sri Ekambereswarar Temple and Sri Kâmâkshi Amman Temple reminds devotees of the Somaskanda form in which Muruga sits in between Parvati and Parameswara. According to mythology, Lord Muruga punished Lord Brahma for his ignorance of the meaning of the Pranava mantra, by a hard knock on his vortex with His fist and then imprisoned him. Later, He assumed the Creation duties of Lord Brahma. In this Kumara Kottam Temple, Lord Muruga installed himself in the sanctum in the ‘Creator’ (Brahmasasta) form.


Every Tuesday and every Krittikai is very auspicious to pray in this temple. The two most important festivals celebrated in this temple are Skanda Shashti immediately after Deepavali in October/Novermber and Vaisaka Festival in April/May every year. The Rahuhala (4.30pm-6.00pm) Sarabeswara Pooja during every Sunday is very special here.


Chennai is the nearest airport to Kanchipuram. One can take flights for most of the important Indian cities and important cities abroad from Chennai. Trains for Kanchipuram are available from Chennai, Chengalpattu, Tirupati, and Bangalore. Kanchipuram is 75-km away from Chennai and is well connected by a network of roads. There are frequent buses from the city to Chennai, Bangalore and other places. For local transportation bicycles can be hired from the shops near the bus stand. Cycle Rickshaws and auto rickshaws are also available on hire to move in and around the city.