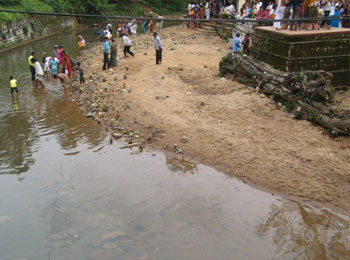 The Kukke Shri Subrahmanya temple falls under the Muzarai Department of the government of Karnataka. It is located in picturesque area at the foot of Western Ghats in Sullia Taluk in the Dakshina Kannada District of Karnataka. The temple is one of the most famous and richest temples in South India. It is directly connected by road from Bangalore, Mysore, Mangalore, Udupi, Dharmasthala and other places and is surrounded by Kodagu in the east, Puttur Taluk in the west, Sakleshpur in the north, and Sullia, in the south. Subramanya used to be called Kukke Pattana in the past. 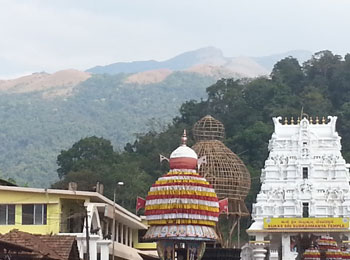 The temple faces the east and the main entrance is present at the back of the Sanctum. The devotees will enter from west through main Gopuram and enter the inner quadrangle from the east. Between the Sanctum and the entrance is the Silver Plated Garuda Kamba. This pillar is said to protect devotees from the poisonous breath of Vasuki who resides inside the Sanctum. Beyond this, there are two halls, the inner one leading to the sanctum. There is a pedestal in the centre of the sanctum. On the upper Dias there is the idol of Shree Subrahmanya and then the idol of Vasuki and little lower the idol of Shesha. While entering the inner quadrangle devotees should remove their shirts and banyans. 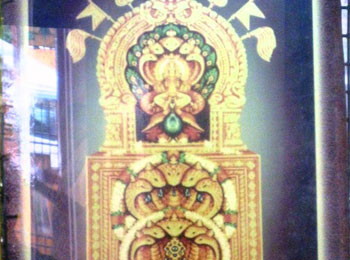 Subramanya used to be called as Kukke Pattana in the past. In the 'Shankara Vijaya' Anandagiri observes that Sri Shankaracharya camped here for a few days during his religious expedition (Digvijaya). Shankaracharya referred to this place as 'Bhaje Kukke Lingam' in his 'Subrahmanya Bhujangaprayata Stotram'. Sri Subrahmanya kshetra has been brilliantly described in the 'Thirthakshetra Mahimanipurana' chapter of the Sahyadrikhanda comprised in the Sanatkumara Samhita of Skanda Purana. This kshetra is situated in the banks of the river 'Dhara' which originates in the Kumara mountain and proceeds to the western sea. 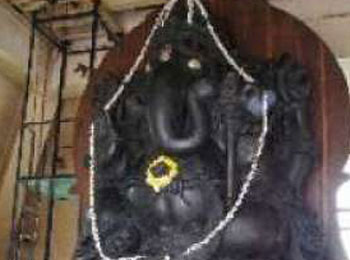 The Kukke Subramanya Temple is dedicated to Lord Subramanya (Lord of all serpents). Vasuki and other serpents found refuge under Lord Subramanya when threatened by Garuda.Kukke Subrahmanya is the abode of nagas. Here pooja is offered to lord Subrahmanya merged with serpent king Vasuki. Hence, believed to be the ultimate solace for salvation from any sort of naga doshas. Thousands of devotees come here from far and wide to offer Sarpa Samskara, Nagaprathishta, Ashlesha Bali and other rituals. The Skanda Purana narrates how, after Karttikeya had slain Tarakasura, Lord Brahma installed the deity of Karttikeya in Subrahmanya Ksetra along with the deity of Vasuki through whom Karttikeya accepts the worship of his devotees. The deity is popularly known as 'Sri Subrahmanya Svami'. In front of the altar is a slivergaruda-stambha which is said to have been erected and consecrated with special mantras in order to shield the devotees from the poisonous vapors from Vasuki's mouth within the garbha-grha (altar-room).

Subramanya village used to be called Kukke Subramanya. According to Shankara Vijaya, Sri Adi Shankaracharya camped here for some time. Sri Shankara himself refers to this place in his 'Subrahmanya Bhujangaprayata Stotram' as 'Bhaje Kukke Lingam'. The Sanatkumara Samhita of Skanda Purana describes this place and its religious importance.History / Mythological Background / Mythic Background:Sri Kshetra is on the river bank of Kumaradhara. Born to annihilate the demonic forces. Kumaraswamy Killed Tarakasura and other Asuras in the battle to Kumaraparvatha with his from this sibling Ganapathi. Devendra had decided to give away his daughter Devasena to him on "Margashira Shudda Shasti". Accordingly the marriage took place on the banks of Kumaradhara Thirtha. Bestowing his grace on "Sarpa Raja" Vasuki, who was doing Thapasya at that time. Kumaraswamy assured to dwell along with Devasena in him. Since then, it is behind that Lord Shanmukha (Skanda) in his spiritual presence is residing with Vasuki in the shrine.

People affected by / suffering from Sarpadosha, whose diseases were not cured by medication, undertake sevas and these they are able to fulfill their wishes. During Subrahmanya Shasti the devotees participate in Beedhi Madesthana, the remover of their physical and mental problems. Not only that, the performing of Madesthana on Uchista of mass feeding and Uruluseva in the quadrangle are well known vows undertaken in this temple. "We bathed in Kumaradhara, Saw Kukkelinga, fed ourselves the food prepared in cauldron" (Kopparige) is a popular folk saying. Soil taken from anthill (Moola Mruthike) is the main Prasada here.

According to one Mythology, after killing the demon rulers, Tharaka, Shurapadmasura and their followers in a war, Lord Shanmukha reached Kumara parvatha with his brother Ganesh and others. He was received by Indra and his followers. Indra being very happy prayed Lord Kumara swamy to accept and marry his daughter Devasena for which the Lord readily agreed. The divine marriage took place on Margashira shudha shashti at Kumara parvatha. Gods like Brahma, Vishnu, Rudra and many other deities assembled for the marriage and coronation ceremony of Shanmukha for which waters of several holy rivers were brought. With these waters of Mahabhisheka fell down to form a river which was later known by the popular name Kumaradhara.

The great Shiva Bhakta and Serpent king Vasuki was performing tapas for years in the Biladwara caves of Kukke Subrahmanya to avoid the attack of Garuda. Following Lord Shiva's assurance Shanmuka gave darshan to Vasuki and blessed him that he would stay with his parama bhakta in this place forever. Hence the poojas offered to Vasuki or Nagaraja are nothing but the poojas to Lord Subrahmanya. Kukke Subrahmanya (Tulu/ Kannada: ) is a Hindu temple located in the small, rural village of Subramanya in Sullia taluk of Dakshin Kannada District near Mangalore , India. This temple is one of the pristine pilgrimage locations in India. Here Lord Subrahmanya is worshipped as the lord of all serpents. The epics relate that the divine serpent Vasuki and other serpents found safety under Lord Subrahmanya when apprehended by Garuda.

Kukke subramanya can be reached by road from Mangalore and Bangalore.KSRTC operates buses on a daily basis from these two places. The nearest airport is the the Bajpe Airport, the Mangalore International Airport, at a distance of 115 kilometres. The nearest railway station is Subramanya Road railway station on Mangalore-Bangalore railway route, which is 7 km from Kukke Subramanya. There is a daily passenger train service from Mangalore. One can catch a local transport from the station for a journey of 15 minutes to the temple.

The Sarpa Samskara is the pooja performed to get rid of the sarpa dosha. Sarpa Dosha is believed to be afflicted by the sarpa (serpent) dosha (curse) either knowingly or un-knowingly through many ways in this birth or any of the previous births. The Pooja can be done either by the person afflicted if he is a male and married, or through a priest. This is because the pooja involves rituals similar to the ones done in performing shrartham (death rites). Sarpa Samskara Seva devotees need to stay for two days at the temple premises. The seva occurs during the day. Food arrangements will be provided to the devotees by the temple devastanam, for four persons only per seva. Many far and wide come here to perform this puja faiths.

One place is Kumara Parvatha or Pushpagiri which has gained the cult status of being the toughest trek in south India with a total of 16 kilometres of distance while climbing up the hill from the Kukke Subramanya side. One can also visit the Bisle Beauty Spot, which is around 20 kilometres from Kukke, from where one can see the mountain ranges of 3 districts. The Kumaradhara River (Bathing Ghat) originates from Kumaraparvatha. In the due course of its flow, it connects with Nethravathi river before joining Arabian Sea. It is believed that the river has magical medicinal powers and can cure skin diseases. Another option is the Dharmasthala Sree Manjunatha Temple which is located around 55 kilometres from here and dedicated to Lord Manjunatha. One can also visit the Sringeri Temple, with the Sri Sharadamba Temple dedicated to goddess Saraswati is about 70 kilometres from here. The Horanadu Temple dedicated to Goddess Annapoorneshwari is around 95 kilometres from Kukke Subramanya Temple is also valuable. The Udupi Krishna Temple is a famous Hindu temple dedicated to Lord Krishna and is located around 100 kilometres from Kukke Subramanya Temple. One may also visit the Kollur Mookambika Temple which is around 90 kilometres from here and dedicated to Mookambika Devi (Parvati Devi), who is considered the source of all weapons and powers. Apart from this, there is the Southadka Shree Mahaganapathi Kshetra, about 35 kilometres from Kukke Subramanya Temple is ‘Southadka Shree Mahaganapathi Kshetra’ in the interiors of Kokkada. This is about 16 kilometres from Dharmasthala. The temple is decorated with lot of Bells mainly, offered by worshippers who have special wishes. One can find lot of monkeys inside the temple. The Mahapuja is performed every year in the month of January. The temple also serves food to all the devotees in the form of prasadam.

There are 7 lodges administered by the temple and provide accommodation to pilgrims at a reasonable price. Private lodges are also available.

The temple offers free food to everyone who visits the temple. The food is very tasty and a must have for everyone. Apart from the temple food, there are some decent eateries, too.

1.While entering the inner sanctum of the temple, men should remove shirt and banian
2.Ashlesa Puja and Sarpa Dosha Puja are the special pujas conducted here
3.Inside the temple, there is a cluster of Lingas. These are known as Kukke Lingas
4.There are shrines here for Kala Bhairava and Uma Maheshwara
5.Sringeri Mutt, Uttaradi Mutt and Sri Subramanya Mutt are located in the surrounding areas


Daily Rituals at the Temple

Kukke Subramanya Temple is very well connected by KSRTC from all the major cities in Karnataka. Private transport is also available from Mangalore, Mysore and Bangalore. Subramanya Road is the nearest railway station and is around 12 kilometres from the temple. Subramanya Road is connected by trains to Mangalore and Bangalore. Mangalore is the nearest Airport and is around 115 kilometres from Kukke Subramanya Temple Kukke Subrahmanya can be reached by road from Mangalore, Bangalore, Dharmastala, Mysore etc. KSRTC operates buses on a daily basis from these and other places. The nearest airport is the Mangalore International Airport, at a distance of 115 km. The nearest railway station is Subrahmanya Road (SBHR) railway station on Mangalore-Bangalore railway route, which is 12 km from Kukke Subrahmanya. There are daily passenger train services from Mangalore, Bangalore. One can catch a local transport from the station for a journey of 15 minutes to the temple (approx Rs. 20 per head)