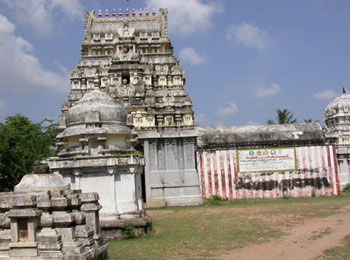 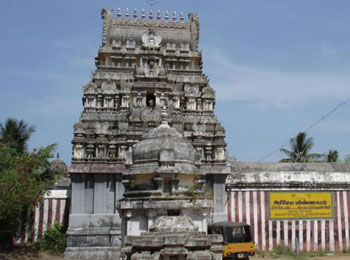 Usually the Nanda vilaku is kept in a beautiful Maadam i.e., a structure used for placing camps and hence this place is known as Mani Maada Kovil containing the Lord as camp in it. 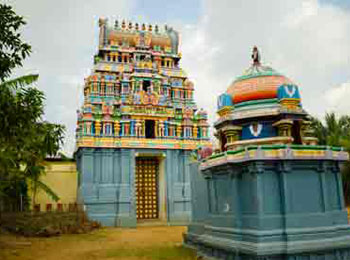 The Moolavar of this Divyadesam is Sri Kuda Maadu Koothan. (The symbol of Moolavar is of the sort Sudai Vadivam is produced using smoldered dirt and henceforth just Thailakaapu is permitted here ie no thirumanjanam is done here). The Moolavar is in the Irundha (Sitting) Thirukkolam confronting his thirumugham towards east course. Prathyaksham for Uthanga Maharishi. Thayaar found in this sthalam is Amrudha Kadavalli. Utsavar found in this sthalam is Gopalakrishnan and he is found with 4 arms. 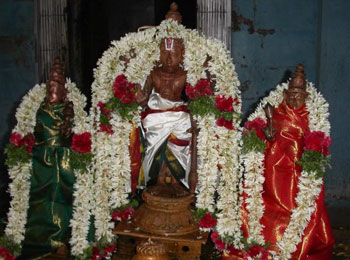 Sage Udhangar was the disciple of Sage Vaidhar and learnt the Vedas from him. After the Gurukula, he wanted to offer Guru dakshina. Wife of Guru demanded Udhangar to get the ear rings of the queen of the land. Udhangar went to the queen and begged for her ear rings. As she knew the greatness of Guru Vaidhar, she gladly gave her ear rings to the disciple. Udhangar was returning to Gurukula. He was too hungry and thirsty. He saw a shepherd with his cows and a pot on his head. Udhangar asked the shepherd to give the contents of the pot to quench his thirst and anger. The shepherd said that there was nothing but cow dung and its urine which even his Guru once consumed. As Guru himself had eaten it, Udhangar leaving his Kamandalam – a hand bowl which sages carry – with the ear rings and began drinking the content of the pot. One Dakshan coming in the way snatched the Kamandalam and ran away. Udhangar chased him but the robber hid in a hole there. Udhangar sought the help of the shepherd to recover the ear rings from Dakshan. He showed a horse-man coming on the way and advised to seek his help. The horse-man came near the hole and made his horse spit fire. Unable to bear the heat, the robber came out and returned the ear rings to the sage. Udhangar thanked the shepherd and the horseman and reached Gurukulam. He narrated his experience to Guru Vaidhar. Guru understood with his wisdom eye – Gnana Dhrusti. He told the disciple that it was test to his Guru bhakti. The shepherd was Vishnu and the horseman was Indira on Agni the fire. Guru also said that the contents of the pot was but nectar which helped him to bear the heat. Udhangar begged the Lord to grant him His darshan. Lord Vishnu with His pot granted the darshan as Kudamadu Koothan.


This is one among the 108 Divya Desas of Perumal. Devotees pray for prosperous life, for relief from enemies and debt burdens. On every day next to Thai Amavasai (New moon day in the Tamil Month Thai), the perumal of this temple is taken in the Garuda Vahanam to join the Thirunaangur Garuda sevai. It is Second and one among the Thirunaangur Thirupathi's.The idol of Moolavar is of the type Sudai Vadivam is made from burnt clay and hence only Thailakaapu is allowed here i.e., no thirumanjanam is done here.


Vaikasi Visakam in May-June and Thai month Garuda Seva in January-February are the festivals celebrated in the temple.


The closest airport is in Trichy.


The closest railway station is in Sirkali


The place is 8 km far from Sirkali. Buses are available only at specific hours. The visitor may reach Sirkali-Annankoil. The temple is 2 km from here.