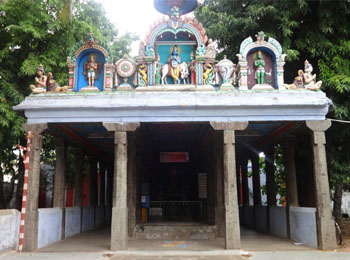 The Krishnaswami Temple is located in Aambasamudram and is dedicated to God Krishnaswami. The famous festival of the temple, The Five Garuda Seva (God appearing on His vehicle - Garuda) is celebrated on the fifth day of the Brahmotsav festival. The God offers His darshan on the seventh day as He came from Punnaivanam.

As Lord Perumal never parts with His consorts, He is praised as Nityakalyana Perumal – ever in a wedding form.

Lord Venugopala, in his alluring beauty, appears playing the flute keeping his right leg slightly back. Divine snake Adisesha is above his head as an umbrella. Consorts Rukmini and Satyabama are by His side. He never parts with them and appears even during the Garudaseva, Mothers are with Him. As a custom, during the Theerthavari festival in Perumal temples, Chakkarathzhwar goes to river (here Tambirabarani) as Lord’s representative. Here Lord Himself comes to the river with His consorts. On the Vaikunda Ekadasi day too, Lord passes through Sorgavasal with His consorts only against tradition. As He is never away from them, He is praised as Nitya Kalayana Perumal – Perumal ever in a wedding style.

During the 9 days of Brahmmotsavam and on the day before Vaikunda Ekadasi, Lord is dressed (Alankara) as Mohini the enticing woman. Devotees can have the darshan of Lord without Mothers only two days in a year. The temple is situated on the northern bank of Tambiraparani. Six pujas ( 6 Kala puja as per rules both in Shiva and Vishnu temples) are observed in the temple. The idol of Lord Venugopala is made of Salagrama stone. Tirumanjanas are performed with oil and milk each day. Procession deity is but a replica of the presiding deity. He removes all the adverse aspects of the devotees caused by planetary effects. People offer Tirumanjanam to Lord on such days of the planets unfavourable to them offering vastras. Those facing Saturn effects pray with dil rice on Saturdays. Students pray with green pulses on Wednesdays to excel in education. Sri Anjaneya is in the front mandap facing north.

Krishna Jayanthi – birth day of Lord Krishna – is celebrated with the opening of eyes of coconuts representing the opening the eyes of a new born child. They also play feeding the child – procession deity with milk from a conch. Then they offer paddy as Prasad to devotees. Paddy Prasad represents the fact that the world became prosperous after the Avatar of Lord Krishna. The vimana, tower above the sanctum is of Padma Vimana design.

A Chera King, a staunch Vishnu devotee had the desire of building a temple for Perumal. Lord appearing in his dream suggested the place in Punnaivanam – forest of Punnai trees – on the banks of River Tambiraparani. He made an idol as he saw in his dream, with His consorts Rukmini and Satyabama, installed and built the temple. Though the presiding deity is named Krishnaswami, people know the temple as Krishnan koil only.

Vaikasi Brahmmotsavam in May-June, Krishna Jayanthi in August-September and the swing festival in Thai Friday in January-February are the festivals celebrated in the temple.


How to Reach Krishnaswami Temple