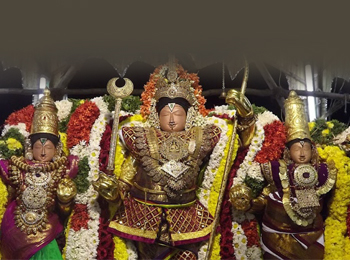 Firstly, Sri Rama’s temples are normally constructed south facing. The legend has it that Sri Vibishana the great devotee of Sri Rama and king of Lanka had requested that he would like to see Sri Rama all the time; therefore Sri Rama is seen south facing. But here in Mudikondan, Sri Rama is seen east facing since he gave dharshan to Saint Sri Bharadwaja as king of Ayodhya even before the real coronation. Sri Sitadevi is seen on to the left of Sri Rama, and Sri Lakshmna on his right, all facing east. Sri Ranganathar installed by Saint Sri Bharadwaja is seen south facing in a separate sannathi.

Secondly, the temple has Sri Ram parivar as the main deities, Sri Kothandaramar along with his Sri Sitadevi and his brother Sri Lakshman. Sri Anjaneya is absent in the assemblage of Sri Ram parivar here. The temple’s utsava murthies has Sri Anjaneya.

Sri Rama while on his way to Sri Lanka along with his vanara sena through this place Saint Bharadwaja requested him to accept the hospitality of his ashram located here. It was understandable that Sri Rama who is on a larger mission of conquering Ravana had told the saint that he will accept the same on his return along with Sri Sitadevi.

After the war in Lanka, Sri Rama had sent Sri Anjaneya on a special mission to prevent Sri Bharata from entering into fire since they had then completed fourteen years of separation from Ayodhya. After Sri Vibishana Pattabishekam at Lanka, Sri Rama along with Sri Sitadevi on their way back to Ayodhya halted at Saint Bharadwaja ashram at this place as promised. Sri Rama had to offer his prayers to Lord Ranganatha before accepting the hospitality of the Saint. Sensing this saint installs Lord Ranganatha vigraha in his ashram. On completion of the prayers to his Lord Sri Ranganatha, Sri Rama accepts the food offered by the saint. On the request of the saint Sri Rama gives dharshan to him as King of Ayodhya, even before his coronation ceremony. Hence this place gets the name “Mudikondan”, in Tamil it means ‘one who is crowned’.

On completion his mission of preventing Sri Bharata from entering into fire Sri Anjaneya returns to the place where his Lord Rama was. On arrival at Bharadwaja ashram he came to know that his Lord had given dharshan to Sri Bharadwaja as “PattabiRama” and was disappointed that he had missed the opportunity and stood at the gate of the asharam itself. Sri Rama then pacified him to accept the food and proceed to Ayodhya to participate in the real coronation ceremony.

How To Reach Kodandaramaswami Temple