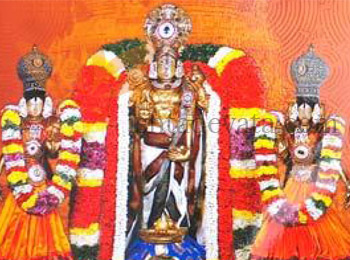 The Koodalazhagar Temple is located at Madurai and is dedicated to God Vishnu. The city of Madurai is renowned for a grand temple that is dedicated to Meenakshi and Sundreswarar.

This temple is quite huge and it spans across an area of around 2.5 acres. The temples boasts of some amazing stone grills and sculptures along with two prakarams and a huge 5 floored Rajagopuram. Besides the chief deity, this temple has shrines for subdeities that include: Lakshminarasimhar, Ramar, Krishnar, Andal, navagrahams and acharayas.

The presiding deity of this temple is Koodalazhagar who is in a sitting posture. The moolavar faces the East direction. The consort of Koodalazhagar can be seen in a different sanctum, she is named Madhuravalli.

This temple is quite ancient and it is known to have been existing since the period of Sangam. This temple has been mentioned in Paripadal and Silappadikaram. The presiding deity of this temple was worshipped a lot by the Sangam poets. It is also known that The Pandya rulers celebrated the famous Avani Onam festival here in praise of Sri Koodal Alagar for a time of 7 days. This festival has also been mentioned in the Maduraikkanchi in the ten long poems called Pathupattu. The Ilangovadigal has revered God as Needu Neer-Vaigai Nedumal which means God who has travelled the whole universe in just three strides.


This temple is situated in a perfect location. It is located in the middle of the hub of the city and is easily accessible through the nearest bus stand.

The nearest airport from this temple is in Madurai.