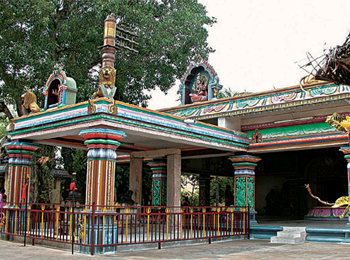 Kongalamman Temple is located in Erode, Tamil Nadu, India. Kongalamman temple is one of the important ones in the Kongu region and this is known as common community temple. Many meetings had been organized in the temple. Many social documents had been written in the temple premises. Many who could not get justice had come to the temple fighting for justice. Many, inhabitants bear the name of Kongalamman.

The main tower-Rajagopuram- looks majestic. Within the temple are the flag post, Balipeeta, Simhavahana (Lion Vehicle), Thoorikkal on the pillar. There is a well on the northern side of the prakara which is ever full with water. Madurai Veeran graces in the temple with his two consorts Bommi and Vellayammal. There are also small temples for Karuppannasamy, Kannimar, Pechiamman, Katteri, Muniappan and Veerabadran.

Three epigraphic evidences had been found in the temple belonging to 13th and 19th centuries, the first, related to the period of the Pandyas and Veerpandian II. There is a big ancient Arasamaram. When the ground of the temple was dug ten years ago for constructing a water tank, a beautiful 2.5 feet Goddess idol was found. People worship Her as Kongalamman.

Kongalamman is considered as the principal temple of Erode and is the Community Goddess of Erode people. The Goddess is endearingly worshipped as Kongalayee.

According to some historical facts, the temple is believed to have been built thousand years ago. Some people wanted to steal the Goddess for installing in their place. While on their way, at Anangur, the axle of the cart was broken and the people fled away. People of Angur, enticed by the beauty of the idol, installed her at their place and began worshipping. She was named Aadi Kongalamman.

The Goddess has 12 hands holding trident, udukkai, snake, Vedas, bell, skull etc. After seeing this idol, people of Erode made one such, installed and began worshipping. While water is carried from Cauvery for abishek in other temple, the first abishek is offered to Kongalamman and this tradition continues even today. Then only, Cauvery water is taken to other temples.

Special abishek and aradhanas are performed to the Goddess on the Tamil and English new year days and also on Fridays in Aadi month – July-August. Special Homas and pujas are performed during the nine days of Navarathri in Purattasi – September-October and Chandihomam on the Vijayadasami day. A big deepa-Aganda Deepa is lighted on the post outside the temple on the Karthika deepa day in November-December. The whole Margazhi month-December-January, the temple will have special pujas for the Goddess

How To Reach Kongalamman Temple

The Nearest Bus stop is Erode.

The Nearest Railway Station is Erode.

The Nearest Airport is Coimbatore