The Bhagavati Temple is dedicated to Shakti and is located in Kodungallur, Kerala, India. This is one of the first temples to have welcomed devotees into it regardless of their caste, sex, colour, creed and race. 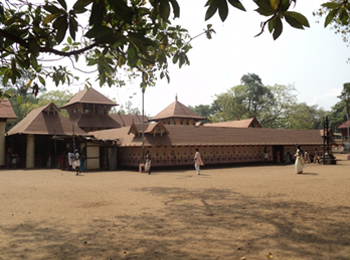 The temple has secret chambers in it and they perform peculiar customs and follow peculiar beliefs. There is no documental evidence about the origin of the temple. Also there is no clue about when it was built and who built it. Some sources claim that the temple was erected in between the Chola era. But it's said that Parasurama had a vision of Bhagavati. He worshipped her, offering liquor and chicken. Kurumba Bhagavati Temple (alternatively Kodungallur Bhagavati Temple) is a Hindu temple at Kodungallur, Thrissur district, Kerala state, India. The idol of the goddess Bhadrakali (popularly known as "Kodungallur Amma") in the temple is unique as it has eight hands with various attributes. The hands hold a head of an Asura, a sword, an anklet, a bell and so on. The temple is probably a memorial built by a Chera king to Kannaki, heroine of Ilango Adigal's Tamil classic Silappathikaram. It is believed to be a former Budhhist shrine, later converted as a Hindu temple. During the reign of the Cheras, Mahodayapuram (Kodungallur) was the capital of the state and one of the most important parts of the region.

The temple was built to commemorate the martyrdom of Kannagi. It is said that sixth avatar of Vishnu, Sage Parasurama built this temple for the prosperity of the people. According to the old chronicles, this Bhagavathi temple was created in the heart of the town many centuries ago to serve a special purpose. Legend says that, after the creation of Kerala by Parasurama, he was harassed by a demon called Daruka. To kill this evil demon, Parasurama prayed to Lord Shiva for help. As advised by Shiva, Parasurama constructed the shrine and installed the Shakti Devi as Bhagavathi. The deity in the temple, it is believed, is Parashakthi herself.

The temple is situated in the middle of a plot of land about ten acres, surrounded by banyan and peepal trees. The srikovil is facing north. The western chamber of the inner temple is the seat of Sapthamatrukas (Seven Mothers) who also face north. The idols of Ganapathi and Veerabhadra are found in the chamber, one facing east and the other facing west, respectively. The idol of bhagawati is about seven feet high and made of wood, carved from a jackfruit tree. The idol has eight arms that carry weapons and symbols. To the left of the temple is the walled enclosure which has a peculiar â€˜Samadhi of Vysoori', perhaps a medieval shrine deity for small pox, chicken pox, mumps and other contagious diseases. Devotees offer auspicious turmeric powder which gives credence to the influence of the Goddess and the legend. Its widespread fame is evident through its clean and well kept sanctuaries. About fifty metres away to the left is a sacred pond (Pushkarini), where devotees bathe before entering the main shrine. It is believed that this pond was created by the goddess by striking the ground with her sword. 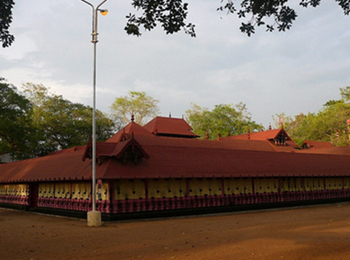 According to legends, it was Bhadrakali who killed the evil demon Daruka. Legend has it that the temple was once a Buddhist monastery. According to Kerala historians, Kodunganallore, Trikkanamathilakam and the neighboring areas were Buddhist and Jain centres during the Chera period. Palliband Perumal, a ruler from that area embraced Buddhism and, as a result, he had to abandon the Perumalship owing to severe opposition from the Hindu community. In Tantric terms the divinity is installed in what is called the "Rurujit vidhaanaâ€, which is a form of installation where at one end, there is Shiva and at the other end, there is Ganapathy, and all the Sapta Matrus are in between. Another belief says that the temple was built by Cheran Chenguttavan. Elango Adigal, the younger brother of Chenguttavan, wrote his monumental work Shilappadikaram while living in Kodungallur. He later embraced Buddhism and spent the rest of his life in the Buddhist monastery at Trikkanamathilakam. From time immemorial, persons wishing to earn merit have been offering animal sacrifice. Countless fowl and goats were sacrificed to the deity as vowed gifts for the protection and fulfillment of desires. At the intervention of many social reformers, the government of Kerala has banned animal sacrifice in any form at this place. At present, only red dyed dhotis are offered to the deity. Many devotees offer rich presents and gold ornaments. The people of Kodungallur themselves believe that this temple was a Shiva shrine and it was Parasurama who installed Sri Kurumba Bhagavathi close to the idol of Shiva. Although this is a small town and has several temples, most of them are Shiva shrines. The poojas are conducted under direct instructions from Sri Bhagavathi Herself. Five 'Sri Chakras' installed by Adi Shankaracharya are believed to be the main source of the powers of this deity. The priests are Namboodiris and Adikas (Madhu Brahmins) who have a right to perform Pushpanjalis' to the Goddess. Bhagavathi being the patron of the royal family of Cranganore, the Raja plays an active part in the celebrations of the festival. Standing upon a rostrum built around a banyan tree, the Raja spreads out a silken umbrella soon after the door of the Devi shrine is opened. The peculiarity of the event is that it denotes the giving permission for all castes to enter the precincts of the temple for worship. This is known as Kavu Theendal'. Devotees run round the temple thrice with sticks in hand before they enter the shrine. The legend goes to prove that the killing of the Demon has taken place and the sticks are substitutes for the arms and swords used in olden days.

The Bharani festival in the temple is one of the grandest in Kerala. It is a month of festivities from the Bharani asterism in the month of Kumbham to 7 days after the Bharani asterism in the month of Meenam. It normally falls between the months of March and April. The festival usually starts with the ritual called 'Kozhikkallu moodal' which involves the sacrifice of cocks and shedding of their blood, which forms an important feature of this temple. The members of the Kodungallur Bhagavathy temple are allowed to participate in this ritual. It is to appease the goddess Kali and her demons who take delight in blood offerings. 'Kavu Theendal', another important event of the festival, overseen by the King of Kodungallur where Vellichapads (oracles) make a run around the temple waving their sabres in the air while the members of their retinue offer reverence over the inner quadrangle. They make cry of abuse at the goddess in bawdy language. Their abuse is said to be accepted by the goddess followed by the purification ceremony the next day. Chandanapoti Charthal is yet another festival of smearing the image with sandal paste. The Thalappoli festival is in the month of Makaram (January to February). The four day Thalappoli commences from the evening of Makara Sankranthi with religious rituals. Big processions headed by richly caparisoned elephants are taken out to the accompaniment of Pancha Vadyam, Paancari, Paandi and the like. This is a huge celebration for the members of the Kudumbi community. 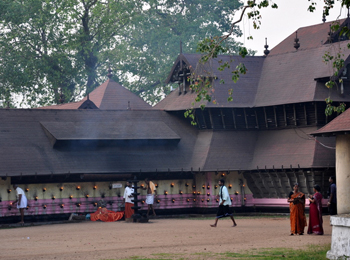 From time immemorial, persons wishing to earn merit have been offering animal sacrifice.
Countless fowl and goats were sacrificed to the deity as vowed gifts for the protection and fulfillment of desires.
At the intervention of many social reformers, the government of Kerala has banned animal sacrifice in any form at this place.
At present, only red-dyed dhotis are offered to the deity. Many devotees offer rich presents and gold ornaments.

Temple is easily accessible from the nearby towns, cities and districts of Kerala. Nedumbassery International Airport in Cochin. There are frequent buses from Thrissur along NH47 to different destinations. The nearest railway station is at Irinjalakuda 20 km from Thrissur