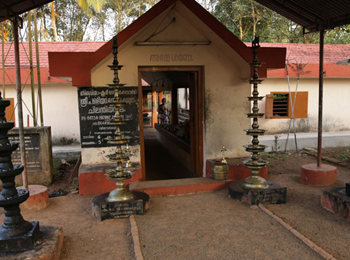 The Kodumon Chilanthi Kshethram, also known as the Palliyara Kavu Devi Kshetram, is in Pathanamthitta district in Kerala and has a history that dates back to about 1,500 years, making it one of the oldest temples in South India. The word ‘Chilanthi’ means spider and curiously, legend goes that the deity of this temple has the power to heal the worst cases of spider poisoning.

The legend of the chilanthi Temple is associated with King Ravindran Vikraman, The legend of the chilanthi Temple is associated with King Ravindran Vikraman, thestwhile king of Chenneerkara Swaroopam, a small sovereign state in erstwhile Kerala. The King was also renowned Ayurvedic physician and filled his palace with traditional herbs and medicines. He had three daughters, but no male heir. As he had no descendant to don his mantle and carry forward his healing skills, the king buried his precious collection of herds all around his palace before he died. Tragedy struck after that- his eldest daughter died of small pox and the second had an untimely death. His youngest daughter began a thapas (rigorous meditation) in the palliyara (royal chamber) Legend goes that she always had a spider on her body! She attained samadi and thus ended King Ravindran Vikraman’s bloodline. Later, a copper plate found in the palace nominated a member of the Mannadi Vakkapanjippuzha Mutt as the King’s successor. However, nobody dared to enter the Palliara. Finally, one day, after several years, the palliara opened on its own and inside, where the Princess sat in Samadhi, was the image of a beautiful goddess in the form of a spider. The sweet scent of medicinal herbs wafted in from the well in the palace grounds and those who drank the water or washed their faces with it were cured of ailments. The Palliyara came to be known as the Kodumon Chilanthi Kshethram.

There is another version of the legend behind the chilanthi temple that is associated with king Shakhibhadran, the author of the full-fledged Sanskrit play ‘Ashcharya Choodamani’ and erstwhile king of Chenneerkara Swaroopam, a small sovereign state of erstwhile Kerala. The construction of the nearby Vaikindapuram Temple is attributed to King Shakthibhadran. The story is that, much irked by a marriage proposal that she had no interest in, the pious younger daughter of the king devoted her life to the deity of the Palliyara Temple and eventually ‘became one with the Goddess’

The annual festival of the temple is held on the Kartika asterism in the Vrischikam month. The Chandra Ponkala is also celebrated at this temple on full moon day in Makaram.