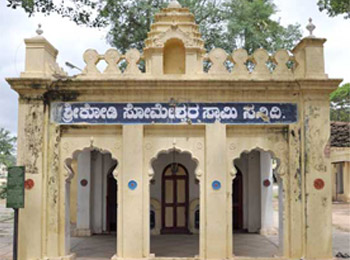 Sri Kodi Someswara Swami Temple is a 2,500 year-old one. It is located in Amba Vilas Palace in Mysore. Lord Shiva is worshipped here as Someswara. The shrine is deeply associated with the founding of Yadu dynasty, to which the Wodeyers, the erstwhile rulers of Mysore belonged. Sri Kodi Someswara Swami temple is located at the corner of Jayamarthanda Gate. The temple is now being maintained by the department of Religious Endowments and Murzrai of Karnataka.

The temple is unique as there is an idol of Ganesha consecrated in the same sanctum sanctorum in which Shiva is worshipped. This is rare. The temple attracts many devotees on the Mahashivaratri day.

This temple is of great importance in the history of Mysore. This was the spot where the Founders of Mysore Kingdom, Yaduraya and Krishnaraya were met by the Royal Priest which led to the founding of the Mysore Kingdom. The little shrine houses an idol of Bhairav which is less than a metre high.

Sri Kodi Someswara Temple is in the northeast side of the fort. It was constructed by Sri Kanteerava Narasaraja Wodeyer in 1399. It has three cells next to each other. The centre cell has a Lingam, the right cell has Goddess Somasundari and the left cell has Narayana. In front of the Narayana shrine are the Navagrahas on a raised dais. Maharani Vanivilasa Sannidana had all these statues installed excluding the Lingam, more than a century ago. It is stated that the Lingam is much older. The outer wall on the south has a slot that has a statue of Dhakshinamurthy. The temple plays a vital role in the Dusshera festivities during the period of Jayachamaraja Wodeyar.

In the first quarter of this century, there was an attempt to demolish this temple. However, Krishnaraja Wodeyar IV, stopped the demolition.

The main deity is Shiva in the form of Bhairav and derives its name because of its location in the past. The deity holds in his four hands, a trident, a drum and a skull and a sword as sickle in his uplifted right hand. A Chauri bearer is standing to the right of Bhairav.

The nearest airport is in Mysore.

The nearest railway station is in Mysore.

One can easily get regular buses to and fro from Mysore to other major cities.